Blame It On the Brain? by Edward T. Welch 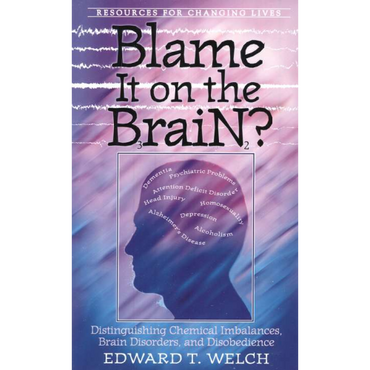 Blame It On the Brain? by Edward T. Welch

EDWARD T. WELCH (M.Div., Biblical Theological Seminary; Ph.D. in counseling psychology, University of Utah) is director of counseling at the Christian Counseling and Educational Foundation and professor of practical theology at Westminster Theological Seminary. He is author of Blame It on the Brain and When People Are Big and God Is Small, and the contributes frequently to the Journal of Biblical Counseling.

Publisher's Description: Viewing brain problems through the lens of Scripture, Welch distinguishes genuine brain disorders from disorders that may not be rooted in the brain. Understanding that distinction will enable pastors, counselors, families, and other concerned believers to know the extent of a person's true responsibilities.

This book by Welch is divided into two major sections. In Part One: Biblical Foundations, Welch begins by asking several questions regarding human behavior in a number of different areas which he will cover later in the book. Here it seems that his main objective is to get the mind of his readers to contemplate questions about subjects that may be new or unfamiliar to them. He does a good job of avoiding any difficulties which might have arisen from the rather technical nature of some of the subjects by asserting that, "What is needed is not necessarily more sophistication in understanding the brain. Instead, what is needed is a more in-depth and practical examination of Scripture that is relevant to these questions" (p. 19-20). In this chapter, he remains resolute in affirming the supreme authority of God's Word in understanding and applying the deluge of information which our secular society is bent on giving us. The rest of this opening section is spent with the following two chapters discussing the relation between the human mind and body. He leads the reader through some of the high points in this discussion, giving a general overview of the secular positions regarding the mind/body relation, as well as surveying the relevant Biblical passages which speak to the issue. Particularly helpful here is his emphasis on the fragile, yet integral, relationship which exists between the mind and the body. As he says, "Heart and body are both two and one. They are two in that the body cannot be reduced to heart or spirit, and heart cannot be reduced to body. But they are mutually independent. They need each other. Human life cannot even be imagined without both the inner and the outer person" (p. 47).
In Part Two: Brain Problems Seen Through the Lens of Scripture, Welch seeks to give some practical application of the principles gleaned from Scripture in the previous section. This latter portion of the book is neatly divided into three subsections. In chapters 4 and 5, we read about legitimate brain dysfunctions which are the result of Alzheimer's disease (and dementia) or serious head injury stemming from an accident. Here, Welch wants the reader to understand that there are indeed cases where the brain can suffer illness or injury to the extent that the behavior and mental capacity of the individual will be directly affected. He is quick to point out that though these conditions may harm the outer man, they do not necessarily mean that the inner man will also begin to dissipate. In chapters 7 and 8, we read about psychiatric problems such as depression and attention deficit disorder (ADD) which may or may not be the result of the brain's alleged deficiencies. Here, Welch seems to indicate that though there may be some relation between the aforementioned psychiatric problems and the activity of the brain, we ought to exercise caution when attempting to ascertain a solution to the given problem. He is also quick to point out that the depression or ADD may be the result of a spiritual problem and that the care of the individual and their relation to God ought to factor in the treatment every bit as much as medicinal treatments. In chapters 9 and 10 we read about two areas of human behavior which the brain is often held responsible for...homosexuality and alcoholism. In both cases, Welch is insistent that the brain cannot the cause of one's sinful behavior. As he says so plainly, "The ultimate cause of sin is always the human heart" (p. 169, emphasis added). He argues that when these behaviors are seen as proceeding directly from the brain's activity, then the connection that exists between human beings as morally accountable agents and a holy and righteous God is severed. What needs to take place is repentance from such sinful behavior in light of the promise of God's gracious provision of forgiveness which can be found in Jesus Christ. Though these sins present particularly strong forms of bondage, God's mercy can break even their stronghold.