Better than the Beginning by Richard C. Barcellos (Paperback) 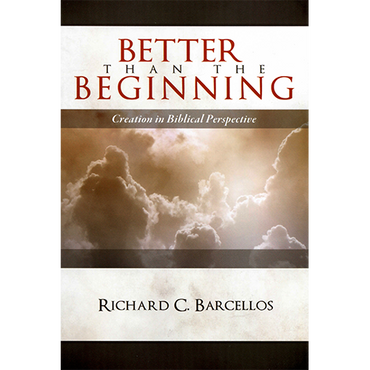 Better than the Beginning by Richard C. Barcellos (Paperback)

In one sense, this is not a typical book on creation. Many books on creation deal with evolution, the length of the days of creation, and ethics in light of creation. These are worthy subjects and I do cover these things in this book. However, the doctrine of creation is much more inclusive in the Bible. Things that we think demand front-and-center attention do not get such by the Bible itself. As the title of the book seeks to display, the beginning is not the end of creation. Creation had a goal intended by God to be attained by man, but man failed. However, God will see to it that the original goal is reached. Creation, therefore, was intended to be a means to an end. The end is what God had in mind all along. The end is not plan B or even plan A. It is simply the plan.

"Creation is controversial, and truly we need to defend biblical doctrine concerning the origin of all things. Yet sometimes in the midst of controversy we can lose sight of the purpose of creation itself. Richard Barcellos uses the creation of the world like a great telescope to look up at the beauty of the Creator. His book focuses our attention on the triune God in Christ. He draws his doctrine from a careful exposition of the Bible, applies it to our practical lives, and calls us to sing the praises of Him who is worthy, “for thou hast created all things, and for thy pleasure they are and were created” (Rev. 4:11). This is an edifying book, and I hope that many will read it." - Joel R. Beeke, Ph.D., President of Puritan Reformed Theological Seminary, Grand Rapids, Michigan

"Although many Christians have been engaged in a life-or-death battle to defend the truth of creation against evolutionary attacks coming from inside and outside the church, there has been little exploration of the doctrine of creation in all its glorious height, depth, width, and length. Richard Barcellos has begun to remedy this neglect with a God-glorifying, soul-edifying, life-transforming survey of this majestic and practical subject." - David P. Murray, Ph.D.,  Puritan Reformed Theological Seminary, Grand Rapids, MI

"After reading this book, I wonder, `is it possible that we are functional deists?’ Have we been so profoundly influenced by the secular culture around us that we fail to see the centrality and foundational character of the doctrine of creation? Is it possible that even while giving lip-service to the doctrine we fail to live in the light of its implications? In this work, Dr. Barcellos shows us why this doctrine is so very important. Not only does he reflect upon the account of creation in Genesis, but he also demonstrates the implications of creation found throughout Scripture. In a day of increasing secularization, it is refreshing to think of the divine purpose in making and sustaining the world. Read this book, and you will deepen your understanding of the Lord’s purposes in bringing the world into existence." - James M. Renihan, Ph.D., Dean and Professor of Historical Theology, Institute of Reformed Baptist Studies, Escondido, CA