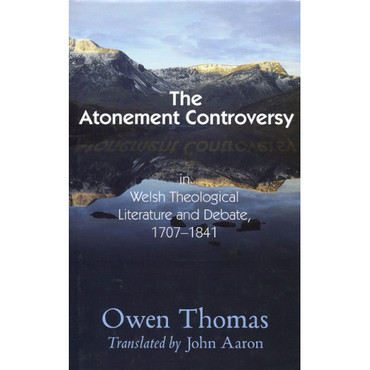 What Christian preachers believe about the atonement always affects their presentation of the gospel.

Dr. Martyn Lloyd-Jones used to insist that this classic work, now translated from Welsh for the first time, gave significant help to preachers in this matter. His own gospel preaching was influenced by it.

The Atonement Controversy will fascinate all who have wrestled with issues raised by the doctrine of a limited atonement, especially in relation to the preaching of the gospel.

It will also be essential reading for all with an interest in Welsh history and theology, particularly those unable to read the work in the Welsh original. Christmas Evans, John Elias, Thomas Jones and Henry Rees are only a few of those who figure in the story told here.

Owen Thomas (1812-91), was an eminent Welsh Calvinistic Methodist minister and author of an epoch-making biography of the preacher John Jones of Tal-y-sarn (1796-1857).

Born in Holyhead, Anglesey, and educated at the newly-formed Theological College at Sala and at Edinburgh University under Thomas Chalmers, Owen Thomas was the leading statesman of his denomination in the period 1850-90. He exercised his ministry in Pwllheli, Newtown, London and Liverpool, and his scholarly articles and biographical work gained him a D.D. from Princeton University in 1877.

Thomas wrote The Atonement Controversy in Welsh Theological Literature and Debate, 1707-1841, published by the Trust in John Aaron’s English translation.