Apostasy from the Gospel by John Owen (Paperback) 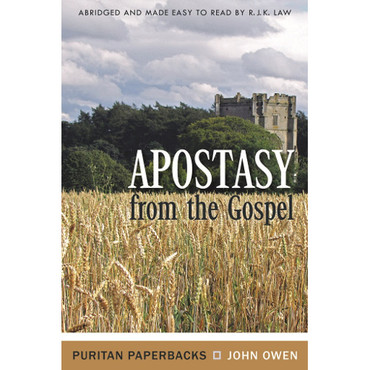 Apostasy from the Gospel by John Owen (Paperback)

Now, in this modernised abridgement of John Owen’s Apostasy From the Gospel, Dr. R.J.K. Law makes its powerful teaching readily accessible to modern readers. Some will find its pages deeply soul-searching; others will be struck with the clarity of Owen’s insight; all will find a work which wounds in order to heal.

Few subjects have received less attention from contemporary Christian writers than that of apostasy. The idea that professing Christians may prove not to be true Christians is, in many respects, too serious a prospect for our facile age. But, for Owen, such avoidance of the issue was itself a pressing reason for writing on it at length and in great depth of spiritual analysis. His exposition is a masterpiece of penetration and discernment.

This books examines what the Church today and in it's history has ignored "Apostasy", mainly those false doctrines, those who call themselves "christians" but by their fruit and results arent. As with every Owen work, exposition is clear and his knowledge of God's Word is incredibly shown. Although he was writing against the biggest apostasy of his time (which still lingers in ours) Roman Catholic Church, it's principles are applicable to the whole dispensation of the Church.

Other good books I have find on this theme are The Truth War, John MacArthur which takes an historical as well as a modern view of the apostasies of our times. Also JC Ryle's 1800's classic "Warnings to the Churches". We often forget the many warnings our Lord gave against false teachers, doctrines, etc. they fill the whole of scripture. Our biggest discernment tool like JC Ryle once wrote is pure Bible study, diligence in searching Him in the Scriptures.