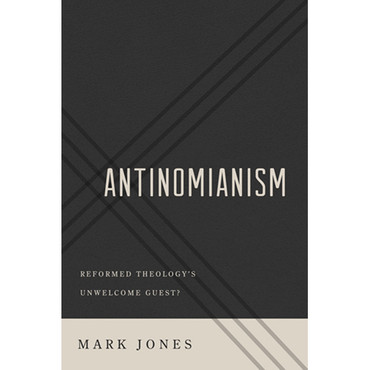 an·ti·no·mi·an noun [an-ti-ˈnō-mē-ən] One who holds that under the gospel dispensation of grace the moral law is of no use or obligation because faith alone is necessary to salvation. —Merriam-Webster’s dictionary

Hotly debated since the sixteenth century in the Reformed theological tradition, and still a burning issue today, antinomianism has a long and complicated story.

This book is the first to examine antinomianism from a historical, exegetical, and systematic perspective. More than that, in it Mark Jones offers a key—a robust Reformed Christology with a strong emphasis on the Holy Spirit—and chapter by chapter uses it to unlock nine questions raised by the debates.

Mark Jones (PhD, Leiden University) is Senior Minister at Faith Vancouver Presbyterian Church (PCA) and Research Associate at the University of the Free State in Bloemfontein, South Africa. He has written and edited several books and most recently coauthored A Puritan Theology: Doctrine for Life.

"Mark Jones's monograph is the work of a Puritan-minded scholar and theologian who understands these things well, has researched historic antinomianism with thoroughness, and has many illuminating things to say about it. His book is a pioneering overview that I commend most warmly, particularly to pastors. Why to them? Start reading it, and you will soon see." - J. I. Packer

"The problem of antinomianism is a hardy perennial for the church. There is a mischievous movement afoot at the moment whose soaring rhetoric about grace is matched by an equally casual presumption on the same. Mark Jones's book is thus to be welcomed: it is biblically grounded, historically sensitive, and above all timely. In addition, through his careful attention to the role of Christ in scripture and in historical Reformed confessional treatments of sanctification, Jones provides a significant supplement to other recent books pleading for a biblical emphasis on personal piety." — Carl R. Trueman, Paul Woolley Professor of Church History, Westminster Theological Seminary, PA; Pastor of Cornerstone Presbyterian Church (OPC) Ambler, PA "We are living in a deeply encouraging day when the sovereignty of God's grace is being rediscovered far and wide. But, as has happened in the past, when such times of biblical ressourcement have occurred, the error of antinomianism has made its appearance. This new work by Mark Jones is thus a timely tract for the times. It is rich in scriptural argument, illustrations from church history, and vigorous application. May it have a wide reading and even wider heeding!" — Michael A.G. Haykin, Professor of Church History and Biblical Spirituality, The Southern Baptist Theological Seminary, Louisville, KY

"Though in the popular imagination antinomianism is often simply identified with a denial of the positive role of God's moral law in the Christian life, Jones demonstrates that it includes a number of additional elements—a belittling of Christ's example of holiness as a pattern for the Christian life (imitatio Christi); a diminishment of the law of God as a true means of sanctification; an unbalanced conception of the relationship between law and gospel; a reluctance to acknowledge the biblical emphasis upon rewards as a legitimate motive for Christian obedience; and a failure to recognize the role of good works as a secondary ground for the believer's assurance of salvation. However, the principal strength of Jones's argument against antinomianism resides in his emphasis upon the fullness of Christ’s person and saving work. Jones shows how a proper understanding of the work of Christ includes both the gospel benefits of free justification and progressive sanctification. In doing so, Jones nicely exposes one of the ironies of antinomianism—in the name of preserving the gospel, antinomianism typically truncates it." — Cornelis P. Venema, President, Professor of Doctrinal Studies, Mid-America Reformed Seminary

"What does a seventeenth century theological controversy have to do with Christian living in the twenty-first century? Everything. With the acumen of an historian and the heart of a pastor, Mark Jones deftly guides readers through one of the most tangled and most important set of issues facing the Reformed church. If you want to preach the gospel with greater biblical clarity, or learn how better to apply the gospel to your daily life, pick up this book and begin reading." — Guy Prentiss Waters, Ph.D, Professor of New Testament, Reformed Theological Seminary

"Church history records that the doctrinal pendulum often swings from one dangerous extreme to the other. This present day is no exception. The legalistic abuses of recent decades are now being replaced with a hyper-grace license to sin. Sad to say, portions of the Reformed community have given shelter to this new Antinomianism, claiming that personal obedience to the Law of Christ is merely optional. Often trendy with 'the young, restless, and Reformed,' this toxic message is poisonous to the soul. In this excellent work, Mark Jones exercises considerable skill in exposing the fatal flaws of this anti-law, cheap-grace easy-believism. Throughout these pages you will find the theological clarity needed to reject the twisted errors of legalism and license and to embrace a true, grace-inspired, Spirit-empowered obedience to the Scripture." — Dr. Steven J. Lawson, Senior Pastor of Christ Fellowship Baptist Church, Mobile, AL