The Theology of the Reformation 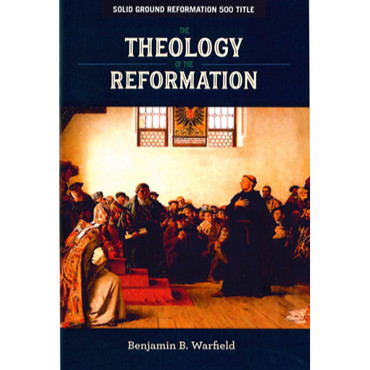 The Theology of the Reformation

In 1917, at the 400th anniversary of the Reformation, Benjamin B. Warfield wrote this outstanding article which appeared in The Biblical Review which was published by The Biblical Seminary in New York. Here Warfield set forth, as only he could, the true Heart of the Reformation. In opposition to many in his day who were seeking to find the genius and the genesis of the Reformation in something other than theology, Warfield wrote: "The Reformation was then - we insist upon it - precisely the substitution of one set of theological doctrines for another. That is what it was to Luther; and that is what, through Luther, it has been to the Christian world. Exactly what Luther did was for himself - for the quieting of his aroused conscience and the healing of his deepened sense of sin - to rediscover the great fact, the greatest of all the great facts of which sinful man can ever become aware, that salvation is by the pure grace of God alone."

"Like his younger colleague at 'Old Princeton,' J. Gresham Machen, Warfield believed that the Christian faith is capable of scholarly defense. In this study, Warfield takes on fallacious, dismissive views of the Reformation set forth by the foremost historian of the early twentieth century, Charles Beard. Warfield shows what the Reformation was at its heart, and how its doctrines alone account for its astonishing power and its manifold effects as a movement in history. And he does so thoroughly armed with forceful arguments and substantial evidence, in a style unsurpassed for sanity, clarity, and more than a bit of scintillating dash. Recommended reading for all Reformed Christians!" - Dr. Joel R. Beeke, President, Puritan Reformed Theological Seminary, Grand Rapids, Michigan

"B B Warfield was a remarkable Christian author, equally at home in Church History and systematic theology as biblical studies. He is remembered today primarily for his robust theology of biblical inerrancy, but there are many other reasons to remember him. In particular, in this quincentennial of the Reformation, Warfield's cogent reflections on theásignificance of the Reformation are important documents to read. Very glad to see these texts back in circulation!" - Dr. Michael Haykin, Professor of Church Histroy, The Southern Baptist Theological Seminary, Louisville, KY

Sam Waldron wrote: "One of my sons is named after Benjamin Breckenridge Warfield. áso you might guess that I love his stuff.á Over the years and especially in my early years he became my teacher on many, many issues.á Even on the rare occasion when I disagree with him, he remains so very helpful and informative.á I welcome the publication of these works by Solid Ground."

This new booklet is the first of a new series entitled SGCB REFORMATION 500 which will introduce vitally important works to the church and the world as we approach the 500th anniversary of Luther's act of naling the 95 Theses to the Church Door at Wittenburg.