An Introduction to the Science of Missions by J.H. Bavinck (Paperback) 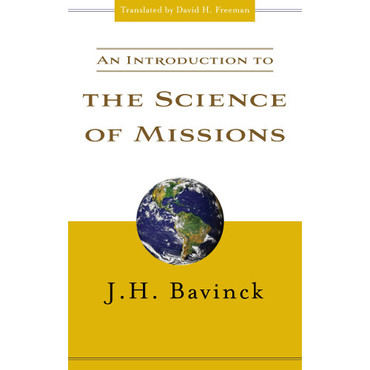 An Introduction to the Science of Missions by J.H. Bavinck (Paperback)

Johan Herman Bavinck (1895—1964) was a pastor in the Dutch Reformed Church and a missionary in Indonesia. He was also professor of missions and practical theology at Kampen and Free University in Amsterdam, where his uncle, Herman Bavinck, famously served as professor of dogmatics.

For several decades J.H. Bavinck's Introduction to the Science of Missions has been recognized as the authoritative textbook in the field of missions. The passing of time has not diminished the relevance of Bavinck's biblical insight and practical wisdom. If anything, the resurgence of paganism in contemporary society may make Bavinck's classic more instrumental to the spread of the gospel today than in years past. Now not only foreign missionaries, but also pastors and elders faced with an increasingly unchurched culture at home can find in this work the invaluable guidance they need.

I first read "Science of Missions" when I lived in South Korea in the early 1990's. I recall the benefit that I received from Bavinck's thorough overview of key mission topics as well as his careful reflection on both the broad overview of Scripture and careful analysis of the more relevant texts. Because of this memory I choose to reread the book recently.

The book is arranged in three parts: Theory, Electics, and a short History of Missions. The first section on the theory of missions included the foundation, approach, and aim of missions. The approach section was most valuable as Bavinick explored cultural and world-view issues and responses that arise when a previously unreached nation encounters the message of Jesus Christ.

Electics is from a Greek verb meaning, "to put to shame" and Bavinck delves deeply into the personal and psychological processes of conversion when someone encounters the truth of the Gospel. The process is much more complex than being convinced rationally, it also involves personal conviction, shame for sinfulness, and a reshaping of worldview depending on the religious foundation of the hearer. It is surprising how little we address this topic today.

And finally, the history section detailed the apostolic extension of the church until Constantine, the Christian empire and its expansion until the seventeenth century, the separation of the movement from State colonization, and finally the expansion of the church in the early 20th century. Bavinck also included an interesting analysis of the motivations that various eras had for evangelizing distant peoples. This section was not well integrated into the rest of the book and, though surprisingly brief, was worth reading.

Upon reading the book again, I cannot recommend it with the same confidence as when I first read it. Its 1954 first publication date and perspective now seem more dated than relevant. The the science of missions today asks different questions than in the 1950's. The advantage of reading the book now is that readers not only get an introduction to missions, but also a snapshot of the relevant issues from a generation ago.