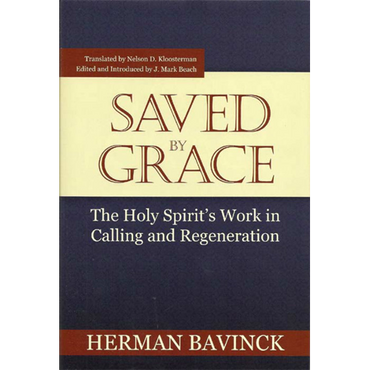 In the late nineteenth century, two distinct reform movements coming out of the Dutch State Reformed Church (the Afscheiding of 1834 and the Doleantie of 1886) merged to form The Reformed Churches of the Netherlands (De Geereformeerde Kerken in Nederland). While both groups had much in common, there remained fundamental points of disagreement, which erupted into controversies over such doctrines as immediate regeneration and presumptive regeneration.In Saved by Grace, Herman Bavinck discusses God’s gracious work in bringing fallen sinners to new life and salvation. He gives a careful historical analysis that shows how Reformed theologians have wrestled to understand and express the Holy Spirit’s work in calling and regeneration since the seventeenth century. Bavinck also brings exegetical precision and theological clarity to the discussion, carefully avoiding the errors of undervaluing and overvaluing the use of means in work of salvation. This book, therefore, takes up questions with which every new generation of Reformed writers must grapple.

Herman Bavinck (1854–1921) succeeded Abraham Kuyper as professor of systematic theology at the Free University in Amsterdam in 1902. His Reformed Dogmatics is a standard text for modern Reformed theology.

"The current tempest in the North American evangelical teapot about the doctrine of salvation was more than matched in Dutch Reformed circles around 1900. As he was then, Herman Bavinck remains a biblically wise, calm, clear and sure-footed guide in a controversy too often marked by the deadly combination of high-order speculation and adamant conviction. The translation of these studies, prepared for a broad, general church audience, does ample justice to Bavinck's own lucid prose and Mark Beach's superb introduction clarifies the intense debates generated by Abraham Kuyper's view on regeneration while also showing Kuyper in a more nuanced light than is often the case. A welcome and important addition to the growing body of Bavinck's work in English" - John Bolt, Calvin Theological Seminary