Am I a Christian? by James Fraser (Paperback) 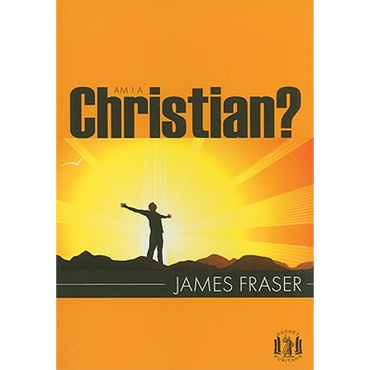 Am I a Christian? by James Fraser (Paperback)

James Fraser endured a long conflict with doubts and in this little book, Am I a Christian?, he records how he overcame his fears and arrived at a firm assurance of his salvation in Christ. Taken from his memoirs (Memoirs of the Rev. James Fraser of Brea, found in Scottish Puritans: Select Biographies, volume two),  In his book Heaven on Earth, Thomas Brooks wrote, ‘A man may be a true believer, and yet would give all the world, were it in his power, to know that he is a believer. To have grace, and to be sure that we have grace is heaven on this side of heaven

JAMES FRASER was born on July 29, 1639. After briefly considering the principles of the Quakers, he began to teach Scripture and was ordained in 1670 or 1672 by some ejected ministers. He preached frequently until July 1674 when he was summoned to appear before the Privy Council. When he refused, he was denounced as a rebel, arrested in 1677 and imprisoned on the notorious Bass Rock. Regarding this imprisoned Fraser, Alexander Smellie wrote, 'no persecution could make his heart bankrupt or could lessen his fruit-bearing. Every day, Fraser records, 'I read the Scriptures, exhorted and taught therefrom, did sing psalms, and prayed with such of our society as our masters did permit to worship God together, and this two times a day.'
James Fraser is chiefly remembered for his 'Memoirs,' which were first published in Edinburgh in 1738, and which have been reprinted by the Banner of Truth Trust in 'Scottish Puritans - Select Biographies, vol. 2.' The 'Memoirs' are a record of the Lord's dealings with him in the course of his 'pilgrimage'. Speaking about Fraser's 'Memoirs' Alexander Whyte said that Fraser 'will live as long as a scholarly religion, and an evangelical religion, and a spiritual religion, and a profoundly experimental religion lives in his native land'.
Endorsement

"To read the work of a Puritan doctor of the soul is to enter a rich world of spiritual theology to feed the mind, heart-searching analysis to probe the conscience, Christ-centred grace to transform the heart, and wise counsel to direct the life. This series of Pocket Puritans provides all this in miniature, but also in abundance." - Dr. Sinclair B. Ferguson