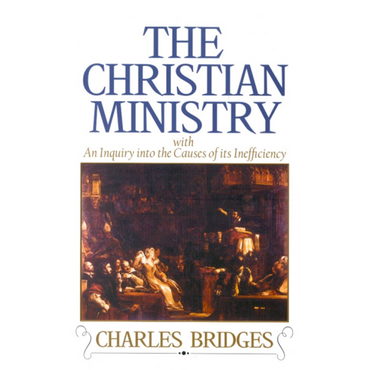 Charles Bridges (1794-1869) was one of the leaders of the Evangelical party in the Church of England in the nineteenth century. He was the vicar of Old Newton, Suffolk, from 1823 to 1849, and later of Weymouth and Hinton Martell in Dorset.


Educated at Queen's College, Cambridge, Bridges was ordained in 1817. As a preacher he was called upon for such important occasions as the Clerical Conference at Weston-super-Mare in 1858 (when he preached along with J. C. Ryle) and the consecration of the Bishop of Carlisle in York Minster in l860.


Renowned though he was in his own day for his pulpit ministry, his subsequent fame rests in the books which came from his pen An Exposition of Psalm CXIX (1827), Forty-eight Scriptural Studies (5th ed. 1833), Fifty-four Scriptural Studies (1837), An Exposition of the Book of Proverbs (1846), a Manual for the Young (1849), and An Exposition of the Book of Ecclesiastes (1860). His The Christian Ministry went through nine editions within 20 years of its appearance in 1829 and has probably remained unequalled in its field. These works earned high commendation from many, including C. H. Spurgeon, who described all Bridge s writings as 'very suggestive to ministers.'


After his death a small selection of his correspondence was published in book form in 1870 and it reveals a man of deep Christian piety. 'I never remember anyone,' says the writer of the Foreword to The Christian Ministry, 'in whose presence it was more difficult to be irreligious, or even frivolous.'

The revival of the Church seems to be closely connected with the condition of its ministry. Bridges sub-titled the study of the Christian Ministry, ‘An Inquiry into the Causes of its Inefficiency’, and, rightly used, it is well suited to promote a faithful and effective ministry.

The Christian Ministry is Bridges’ best known literary work, but his expositions of Proverbs, Ecclesiastes and Psalm 119 are also highly valued.

Bridges begins by considering the general and personal cause of ministerial ineffectiveness, and goes on to examine comprehensively preaching and pastoral work. This book was one of the few which the godly Robert Murray M’Cheyne took with him to the Holy Land, and, in its field, it is without an equal.

‘To enlighten the mind and affect the heart are the two main ends of the Christian ministry. The first demands wisdom and plainness, the second fervency, as the spirit of scriptural preaching. This combination exhibits the minister as “a burning and a shining light” … imparting the spiritual light of divine truth, as well as the spiritual heat of divine fervour … Nothing, says Baxter, is more indecent than a dead preacher speaking to dead sinners the living truth of the living God.’ — CHARLES BRIDGES, in The Christian Ministry,

The Christian Ministry by Charles Bridges is a very helpful book on the pastorate. After discussing what being a pastor entails, however, a large portion of the book is, as the subtitle states, "an inquiry into the causes of its inefficiency." The author places special emphasis on the wiles of Satan--most especially "wanderings into worldliness." Other causes of ministry failure include the fear of man, want of self-denial, and most especially "neglect of retirement"; i.e., spending prolonged and serious time in prayer, especially for the members of the congregation. As Bridges states, prayer is "one half of our ministry, and it gives the other half all its power and success."

The next session is devoted to preaching, with special attention given to proclaiming both the Law and the gospel. While there is much to profit from here, I am concerned by one subsection, where Bridges seems to suggest that some pastors preach best not by their pens, but by "the excitement of their feelings." While he does attempt to nuance this opinion, it seems that Bridges comes dangerously close to downplaying the need for careful preparation of sermons. Granted, Bridges could have been referring to lifeless sermons that were being preached in the 19th Century Anglican Church; but this may be lost on the modern reader.

With this caution in mind, The Christian Ministry is a very useful book--most especially the section on the causes of an inefficient ministry. However, it is not recommended that this be the only book a prospective pastor ought to read on this subject. Even still, I do recommend that both pastors and seminary students read it, as there is much valuable information to be gleaned.