A History of Preaching (2 Volume Set) 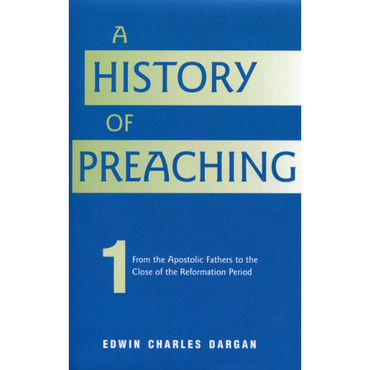 A History of Preaching (2 Volume Set)

his two volume hardcover set was first published in 1905, and was written as a tribute to Dargan's homiletics professor at Southern Baptist Theological Seminary, John Albert Broadus. Dargan later became a colleague and then the successor to Broadus in the chair of Homiletics at SBTS in Louisville, KY. The inspiration for these volumes came from the yearly "delightful lectures on the History of Preaching" from Broadus. "Under his inspiring teaching my interest as a student was awakened in the subject, and when years afterward it fell to me first to share his labors of instruction and then to succeed them, I became more and more deeply interested in the historical part of the course in homiletics."

PERIOD I - AD 70 - 430
Chap. 1 - Preaching during the First Three Centuries
Chap. 2 - The Culmination of Ancient Preaching in the Fourth Century