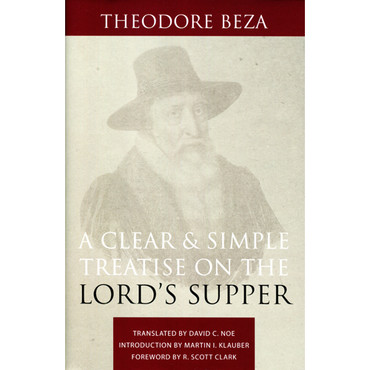 Theodore Beza’s A Clear and Simple Treatise on the Lord’s Supper (1559) advances a tireless defense of the Reformed perspective on the Lord’s Supper, responding chapter by chapter to specific arguments raised against John Calvin by his Lutheran opponent Joachim Westphal. Beza makes great use of the concept of metonymy, or a figure of speech, in his interpretation of the words of institution, yet he equally champions the position that the Lord’s Supper is not a bare symbol and in it we have true communion with the risen Christ. And like Calvin, Beza refers extensively to the church fathers, especially Augustine, in defense of his position.

This often-overlooked treatise marks some of the major differences between the Reformed and the Lutheran movements during the so-called second generation of the Reformation. A critical issue at the time, sacramental theology was at the forefront of the original break with Rome and prevented the various Protestant movements from uniting. Its translation into English from the original Latin provides a wider opportunity for those interested in these movements to learn more about some of the substantial issues of the period.

Appended to the book are two smaller treatises of Beza: A System of Doctrine on the Sacramental Substance and The Law of God in Various Classes.

Theodore Beza (1519–1605) was an influential French Protestant pastor and successor of John Calvin at the Geneva Academy.

David C. Noe is associate professor of classics at Calvin College and a ruling elder in the Orthodox Presbyterian Church.

Martin I. Klauber is an affiliate professor of church history at Trinity Evangelical Divinity School.

“This translation of Theodore Beza’s response to Joachim Westphal makes available to English-language readers an important contribution to the Eucharistic controversy of the sixteenth century. Beza was not only Jean Calvin’s successor but also an influential theologian in his own right. The Clear and Simple Treatise on the Lord’s Supper reveals Beza’s rhetorical skills as well as his theological convictions in a debate that helped shape Reformed orthodoxy.” — Amy Nelson Burnett, Paula and D. B. Varner University Professor of History, University of Nebraska–Lincoln

“This text represents a real treat: one of the great minds of the Reformation addressing one of the great subjects of the Reformation. At a time in the church’s history when many are finding that a recovery of a rich understanding of the Lord's Supper is a key part of pastoral care, it is very useful to have the thoughts of Calvin’s successor so readily available.  Demonstrating both continuity with his famous predecessor but also an increasing care with distinctions and nuances, Beza has provided today’s pastors, elders, and, indeed, Christians in general with a very helpful discussion of Reformed sacramental thinking.” — Carl Trueman, Paul Woolley Professor of Church History, Westminster Theological Seminary, and pastor of Cornerstone Presbyterian Church (OPC), Ambler, Pennsylvania

“This excellent volume of translated treatises of Theodore Beza provides a close look at important writings from Calvin’s successor in Geneva. The main piece is Beza’s defense of Calvin’s view of the Lord’s Supper, particularly on the presence of Christ in the Supper, in opposition to Joachim Westphal, who represented the Lutheran viewpoint. This was a crucial theological topic between Reformed and Lutheran communions. Here Beza’s powers are on full display as he makes the case for the validity of the view Calvin articulated and responded to other contested matters such as biblical hermeneutics, Christology, and worship. We owe a great debt to the superb work of David Noe, whose outstanding translation and notes unlock these works and give us a greater appreciation of Beza and a deeper understanding of key issues.” — Donald K. McKim, editor, The Encyclopedia of the Reformed Faith and The Cambridge Companion to John Calvin