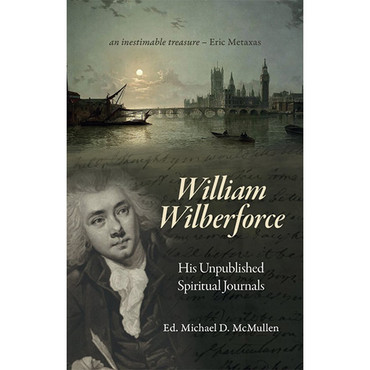 These spiritual journals will give readers insight into the heart and mind of one of Britain’s leading abolitionists.

William Wilberforce (1759–1833) is best remembered as a leading figure in the movement to have the slave trade abolished throughout the British Empire. He was a Member of Parliament from the age of 21 until he retired due to ill health at the age of 66. His conversion in 1785 caused him to change his lifestyle and to commit his future life and work to the service of God.

Throughout his writings his constant desire to be a better Christian is striking. This man, admired by many, saw himself as a sinner, and his diaries are filled with his striving to put this sin to death. He follows a Puritan pattern of self–introspection and his journals are form of spiritual confession.

Michael McMullen has transcribed the original manuscripts and has added many helpful annotations and footnotes. Scripture passages, book titles, names of people and events are clarified. These annotations will assist the reader to better understand the context and value of the journals. This work gives an invaluable insight into the life and motivations of William Wilberforce. There is much to be gleaned from his example in life and culture today.

William Wilberforce (1759 – 1833) was a British politician, philanthropist and a leader of the movement to abolish the slave trade. Dr. Michael D. McMullen is Professor of Church History at Midwestern Baptist Theological Seminary, Kansas City.
Editorial Reviews

Despite the numerous demands and pressures of parliamentary business, social contacts and family commitments on his time, Wilberforce consistently set aside over an hour each day, and many more on Sundays, for personal and family Bible reading, prayer and meditation. It is a tremendous service to have this Journal transcribed and a bonus to have the excellent introductions to each section.

Michael McMullen’s detailed labour of love for the first time makes widely accessible the inspiring and fascinating inner spiritual life of one of the greatest public figures of the later Hanoverian era.

William Wilberforce, the leader of the campaign for the abolition of the slave trade, was a devoted Evangelical Christian. His spiritual journals between 1785 and 1833 open a window on the inward life of this public man.

In these pages we see a man, an undeniably fruitful man, abiding in Christ. Believers will find a brother travelling the path that they have known, and will be inspired to press on, rejoicing by faith in the One who brings fruit into sight. I can’t think of a more thrilling or important publication from the last ten years.

William Wilberforce recorded many intimate details about his spiritual life, and thanks to Michael McMullen’s painstaking work, many of them are published here for the first time. This book is an inestimable treasure – it draws back the curtain on Wilberforce’s struggles and rejoicings in his own words as he wrestled both with himself and all that God had called him to be and do.

William Wilberforce was a man marked by a wonderful integrity between the private and the public. Now more than ever, integrity amongst all who bear the name of Jesus is needed. William Wilberforce has so much to teach the church today, and Michael McMullen has performed a significant task in making this possible by transcribing and explaining Wilberforce’s journals. As the rector of the church where Wilberforce once worshipped, I am deeply grateful for Michael’s work.

William Wilberforce has long been regarded as the classic example of evangelical activism in the long eighteenth century. His tenacious fight against the barbarous inhumanity of the slave trade and slavery have made him an iconic hero for many in our day. But what is often not remembered is the spiritual matrix out of which Wilberforce drew the resources to wage his indomitable battle for justice and social righteousness. Prof McMullen has put us all in his debt by editing these previously–unpublished diaries of this great human being. They reveal that Wilberforce’s love for the African people was intimately tied to his ardent Christian spirituality. Wilberforce was a man who lived life coram deo. May the reading of these diaries inspire many in our day to do likewise and attempt great things for God.

The spiritual journals synthesized by Dr. McMullen provide timeless applications for the young men I work with who seek to impact their own culture.

These remarkable journals of William Wilberforce, all carefully edited and some published here for the first time, allow us to chart the spiritual life of perhaps the most consequential shaper of practical Christianity since the Reformation. Here is … a pattern of devotion in the royal service of Christ.