The Works of John Robinson (Vol. 3) 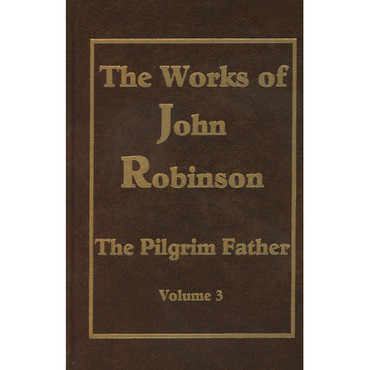 The Works of John Robinson (Vol. 3)

The unique characteristic of the Pilgrims was their separatist stand. However, their legacy was also one of tolerance toward those that differed with them; attempting to focus on what could unite and a desire to be used by the God they loved to bring peace between those with whom they disagreed. For this purpose, Robinson seeks to unite the reformed churches in Europe by clarifying and defending the theology and practice of Christian Self-government.

A Just and Necessary Apology:

On Religious Communion, Private and Public

The People’s Plea for the Exercise of Prophecy

A Letter to the Congregational Church in London

An Appeal in Truth’s Behalf

An Answer to a Censorious Epistle

A Catechism; being an Appendix to Rev. W. Perkins’s Foundation of the Christian Religion

Appendix 1 – The Church in Southwark, by Rev. John Waddington

The Exiles and their Church in Holland

The Church in Holland

The Church at Amsterdam

Letters between Churches of Leyden and Amsterdam

The Principles and Regulations of the Churches at Amsterdam, Leyden, New Plymouth