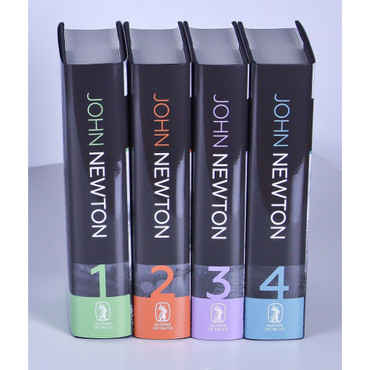 When John Newton, ex-sea captain and, as yet, unsuccessful candidate for the Church of England ministry, finished his first book (an autobiography) in 1762 there was no ready publisher. Any thought that he was destined to become one of the best known authors of his age would have been as fantastic as the last 37 years of his life. But in both cases the improbable came about. Becoming curate of Olney, a small village in the south of England, in 1764, Newton there laid his reputation as an evangelical writer, pre-eminently by his published letters and by the Olney Hymns (including 'How Great the Name of Jesus Sounds', 'Glorious things of Thee are spoken' and 'Amazing grace'). Before the end of his subsequent pastorate at St. Mary Woolnoth, London (1780-1807), his writings were prized around the world from America to Australia.

Newton has a firm place in the classics of Christian literature. While his style is strong and clear, it is the spiritual attractiveness and importance of his main themes which secure the permanent value of his writings. Most of his books came, unpremeditated, out of a need to help his congregation or individual hearers, and it is in practical helpfulness towards Christian living that he excels. If he is loved rather than admired, it is for this reason. Conformity to Christ is the one subject upon which his themes finally focus ('It will not be a burden to me at the hour of death that I have thought too highly of Jesus, expected too much from Him myself, or laboured too much in commending and setting Him forth to others'). Not surprisingly, Alexander Whyte could write, 'For myself, I keep John Newton on my selectest shelf of spiritual books: by far the best kind of books in the whole world of books.'

The text of this new four-volume edition of The Works of John Newton has been entirely reformatted, producing a clear and easily navigable set of documents for today's reader.

Born in London in 1725, deprived of the godly influence of his mother before he was seven years old, John Newton was but two years at school before he went, at the age of eleven, on his first voyage with his father, a sea captain. From that time till the age of thirty, when his health was broken by a stroke, Newton endured the wild rigours of a life before the mast, including being press-ganged aboard a naval vessel and flogged when captured after desertion. Only his love for the youthful Mary Catlett preserved him from suicide. He was released from the navy only to join in the slave traffic across the Atlantic, and was reduced almost to death on the Guinea coast before being delivered by a friend of his father's.

Throughout these sad events there ran a divine purpose; and while Newton forgot the Saviour whom his mother had so often commended to him in childhood, and while he became, like one of old, a 'blasphemer and injurious,' it was all leading to a day in the midst of a tremendous storm at sea when he was brought to say: 'I stood in need of an Almighty Saviour, and such a one I found described in the New Testament.