The Way to True Peace and Rest: Six Sermons on Hezekiah's Sickness: Isaiah 38:1-22 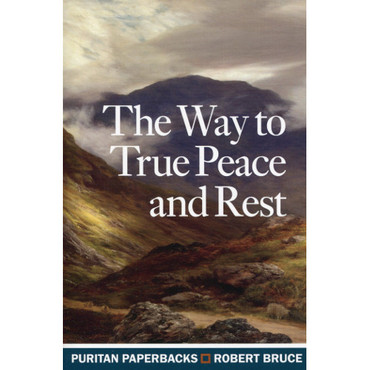 The Way to True Peace and Rest: Six Sermons on Hezekiah's Sickness: Isaiah 38:1-22

It was said of Robert Bruce that ‘no man in his time spake with such evidence and power of the Spirit’. One is certainly left with that impression after reading The Way to True Peace and Rest, his six sermons on Isaiah 38, a chapter that records the illness that afflicted King Hezekiah of Judah and his reaction to it. Although various sicknesses are common to all humanity, yet people react in very different ways when such trials are visited upon them.

With a wonderful blend of faithful exposition, keen insight, and practical application, Bruce urges his hearers to ‘take heed to the various aspects of this account, that we may learn how to conduct ourselves in the event of our suffering some serious disease; thus, learning from King Hezekiah’s behaviour, we may come to obtain the same comfort he experienced.’

The Preparation for the Lord’s Supper

An Exhortation to the Presbyteries of Lothian by Master Robert Bruce, Minister of Christ’s Evangel, at Edinburgh, 16th September, 1589

Robert Bruce (c.1554-1631) was a minister in the city of Edinburgh, and a leader in the Reformed movement in Scotland. He first studied law in St Andrews, France, and Louvain, but when he returned to Scotland, changed course and focused his attention on becoming a minister in the Kirk. He was much influenced by Andrew Melville, the well-respected academic and leader within Presbyterianism. He became minister of St Giles’ in Edinburgh in 1587, and was Moderator of the General Assembly of the Church of Scotland in 1588 and again in 1592. He had been a favourite of the King, James VI, but after 1596, when relations between James and Scotland’s Presbyterians had soured, Bruce spent much of the rest of his life in enforced exile. John Livingstone, a contemporary of Bruce’s, said of him: ‘No man in his time spake with such evidence and power of the Spirit… yea, many of his hearers thought that no man since the apostles spake with such power’, and William Cunningham, Free Church of Scotland theologian and editor of Bruce’s works in 1843, considered that Bruce was ‘one of the most distinguished men whom Scotland has ever produced’.

For a much fuller account of the life and work of Robert Bruce, see the chapter ‘Robert Bruce: Standing Fast in Dark Days’ in A Scottish Christian Heritage by Iain H. Murray.