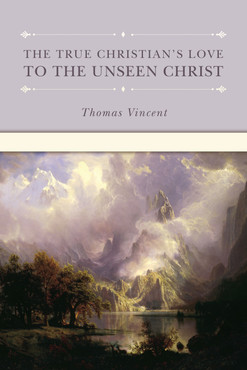 Love to Christ is essential to true Christianity. Without love, faith lies dead, like a body without a soul. While many claim to be Christians, their lack of love for Christ proves that they know nothing of Christianity’s true nature. Therefore Christ demands love from all His disciples, knowing the transforming power it has over the souls of men.

In The True Christian’s Love to the Unseen Christ, Thomas Vincent endeavors to excite and provoke Christians to a lively and vigorous exercise of love toward Jesus. With pastoral affection, Vincent delivers a variety of arguments and motivations to stir us up to love. He also provides a number of wise directions for how to warm and enflame one’s heart with a love for Christ. A devotional classic, this specimen of practical Christianity is full of biblical application and encouragement.

This volume also includes a biographical sketch of the author and appended sermon concerning Christ’s manifestation of Himself to those who love Him.

Thomas Vincent (1634–1678) was born in 1634 in Hertford, England. He was the second son of John Vincent and the elder brother of Nathaniel Vincent. He was educated first at Westminster School, then at Felsted School, Great Dunmow, Essex, an institution of strong Puritan convictions. In 1648 he was elected to Christ Church, Oxford, where he earned a bachelor of arts degree in 1652 and a master of arts degree in 1654. Leaving Oxford, he served as chaplain to Robert Sidney, Second Earl of Leicester. In 1657, Vincent succeeded Thomas Case as rector of St. Mary Magdalen, Milk Street, London, where he remained until he was ejected for nonconformity in 1662.

For the last twelve years of his life, Vincent preached to a large congregation gathered at Hand Alley, off Bishopsgate Street. He was fined and probably imprisoned at least once during those years. He devoted himself extensively to educating young people. Vincent died in 1678, survived by his wife, Mary, and at least four children.

“Secular history generally paints Puritanism as a rather unsophisticated form of religion. Puritans are usually caricatured as cold, austere, and simplistic, devoid of any appreciation for love and beauty, obsessed with law and judgment. This book surely debunks that myth. It reveals the Puritan passion for ‘joy inexpressible and full of glory,’ which grows out of a warm-hearted, fervent love for Christ.”—John MacArthur, from the foreword