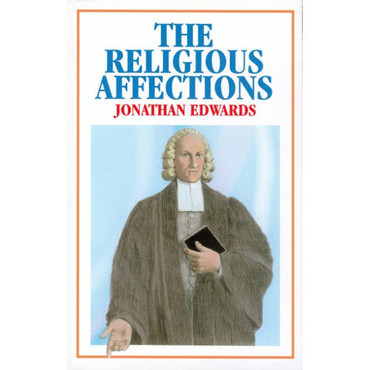 Jonathan Edwards was one of the few truly great theologians of the English-speaking world, an intellectual and spiritual giant. When he began his ministry at Northampton, Massachusetts, New England had drifted from the Puritanism of its founders. Resisting the current trend, Edwards preached the whole counsel of God, and God plainly honoured his testimony. Yet to all appearances his life ended in tragedy; voted out of his pastorate by the people of Northampton, he died of fever at Princeton, only two months after taking over as President of the College. Edwards is perhaps best known as the theologian of revival, a subject on which he was uniquely qualified to write, by reason of his theological grasp and a first-hand experience of awakenings. Of his several treatises in this field, The Religious Affections ranks as the ‘magnum opus’.

The author’s object in this book is to distinguish between true and false religion by showing the marks of a saving work of the Holy Spirit in men. In his Preface, Edwards stresses the importance of using ‘our utmost endeavours clearly to discern…wherein true religion does consist’. For ’till this be done, it may be expected that great revivings of religion will be but of short continuance’.

‘This is an uncomfortable book. Edwards wrote this book against the backcloth of the awakenings in the 1730s-40s. He’s aware of the extremes that the mighty work of God had produced; where God is at work, Satan will be at work, and Edwards very honestly acknowledges the excesses. But what he does here is to open up the Scriptures and to highlight evidences that appear to be gracious evidences, but are actually not gracious evidences – and then he looks at evidences that truly are gracious evidences. Now, he is not seeking to crush people with little faith that is yet saving faith, but he wants people to understand that where the Gospel of grace takes root in someone’s life, it always produces Godly affections. So he begins his treatise with this; “True religion in great part consists in godly affections.” It’s a remarkable read.’ — IAN HAMILTON