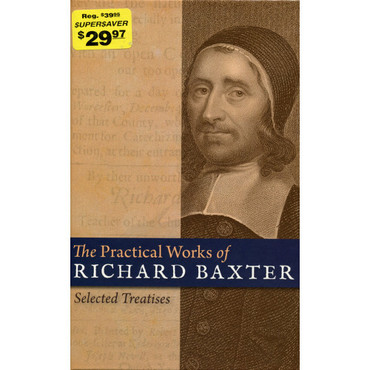 “The most outstanding pastor, evangelist and writer on practical and devotional themes that Puritanism produced.” —J. I. PackerAn English Puritan, Baxter was an “exegete” of culture, a memorable preacher, and a prolific writer. He is known for his practical advice on applying Scripture to all areas of life and his emphasis on the “heart work” involved in doing everything to the glory of God—whether one is pastor, pilgrim, or parent.The Puritans knew that they would not be able to deal with man’s problems if they did not understand the source from which all these problems stem. Therefore, they sought what the Bible had to say about the heart in order to properly confront the difficulties that flow from it. This edition of the most complete abridgment of Baxter’s 23-volume work is a treasury of carefully selected sermons and essays that combine the principles of communion with God and the specifics of obedience to God, including:• The Saints’ Everlasting Rest• The Divine Life• A Treatise of Conversion• A Call to the Unconverted• Now or Never• Directions and Persuasions to a Sound Conversion• Directions for Weak Distempered Christians• The Character of a Sound, Confirmed Christian• The Mischiefs of Self-Ignorance and the Benefits of Self-Acquaintance• Dying Thoughts Baxter’s work is a welcome and helpful addition to any personal or pastoral library.

Richard Baxter (1615–1691) was one of the preeminent Puritan leaders of his day, the most successful Puritan pastor, and the most productive Puritan writer. Ordained at 23, he spent 17 fruitful years as curate at Kidderminster, England. He was ejected from the Church of England by the Act of Uniformity in 1662 and was imprisoned at least three times for his preaching. The author of more than 150 published treatises including The Reformed Pastor, The Godly Home, and the politically controversial A Holy Commonwealth, his practical works were the most popular.

Richard Baxter (1615-1691) was an English Puritan pastor, theologian, and Stanley named him "the chief of English Protestant Schoolmen." Baxter became one of the most influential leaders of the nonconformists, spending time in prison for his strong biblical and Puritan convictions.

Baxter asserts: "If family religion were duly attended to and properly discharged, I think the preaching of the Word would not be the common instrument of conversion."

He wrote 168 or so separate works including such treatises as the Christian Directory, the Methodus Theologiae Christianae, and the Catholic Theology, might each have represented the life's work of an ordinary man. Herein is one of the most comprehensive compilation as an abridgment of Baxter's 23-volume work of specific sermons and theses that include:

Puritan expert Packer opines: "The most outstanding pastor, evangelist and writer on practical and devotional themes that Puritanism produced."

Baxter adds: "The churchyard is the market place where all things are rated at their true value, and those who are approaching it talk of the world and its vanities with a wisdom unknown before. "
This volume from a major Puritan is an outstanding resource for both the minister and the family. - Mike Robinson