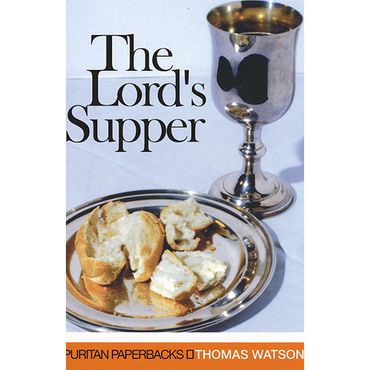 Thomas Watson (c. 1620-1686), the Puritan preacher and author, was probably born in Yorkshire, although the exact place and date of his birth are unknown. He studied at Emmanuel College, Cambridge (BA, 1639; MA, 1642), where he was apparently a diligent student. Certainly his intellect is apparent in his writings, which show a profound grasp of the English language, as well as a solid understanding of Hebrew, Greek, and Latin. He quotes from the early church fathers, and his familiarity with the breadth of the scriptural canon is stunning. Cross-references from the entire biblical corpus are sprinkled throughout his sermons, revealing a deep understanding of many texts obscure to most modern day Bible students. A solid understanding of history, botany, medicine, physics, the classics, logic, and various trades are revealed in his sermons.

To Thomas Watson, the Lord’s Supper was a visible sermon, a mirror in which to gaze on the sufferings and death of Christ. ‘God, to help our faith, does not only give us an audible Word, but a visible sign.’ But more than this, the Supper was a time in which to partake of the benefits of Christ’s death by faith, to be fed and cherished by the Lord in his own banqueting house, and to obtain a foretaste of the glory which will be fully realized only in heaven. Watson’s aim was to stimulate greater love to Christ in His people, and to enhance their appreciation of the Supper as a spiritual feast for all believers. His fine exposition shows the rich provision made in the Supper for all who love the Lord, while it also lays bare the emptiness of all mere sacramentalism.

When I began reading Thomas Watson's The Lord's Supper I was expecting, and probably seeking, a better idea of the biblical teaching of the sacrament of communion. What I got was actually much more beautiful.

This book is almost more of a large pamphlet than a book, finishing at just eighty-six pages. I thought when I began I would start it and finish it all in one day. I quickly decided to take it slowly. Watson clearly writes to a group of people who already share a common understanding of the sacrament, as so he makes no defense for any kind of theological standpoint. Instead, as with most Puritan literature, he focuses primarily and consistently on the cross and the implications that it bears for us.

Watson calls us back consistently to undertake the difficult task of examining ourselves, particularly in the context of the sacrament. However, readers who earnestly consider his words will in all likelihood find them permeating their daily walks.

I ended up reading this book like a daily devotional. Taking just a few pages at a time and thinking about them, praying about them, and considering how what was said might affect my life. So what might have taken only a matter of hours on an intellectual level, took more than a week on a spiritual level. I regret no part of that.

In classic literature such as the puritans, it can sometimes seem like your reading a completely different language. As far as ease of reading goes, Watson falls on the easier side. The most difficult part of this book for modern readers will probably be a sometimes unusual vocabulary and occasionally a strange sentence structure.

All in all, I would recommend this book to Christians; particularly those interested in finding deeper love for Jesus, gratitude for the cross, and humility of heart. What honest Christian doesn't want that?