The John the Baptist of the Reformation (Paperback) 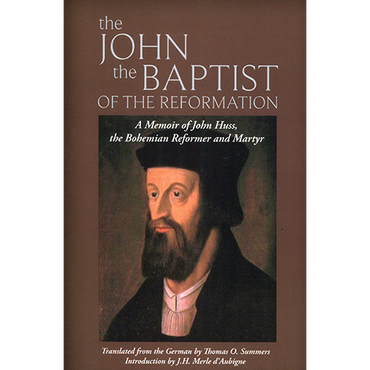 The John the Baptist of the Reformation (Paperback)

The John the Baptist of the Reformation A Memoir of John Huss, the Bohemian Reformer and Martyr Paperback: 106 pages Publisher: Solid Ground Christian Books Author: Thomas O. Summers ISBN-13: 978-1599253374 Weight: 4.4 oz Publisher's Description John Huss (a.k.a. Jan Hus) is regarded to be one of the earliest known religious thinkers and reformers in the world. A philosopher and a Master at Charles University (Prague), Huss was greatly influenced by the writings and teachings of John Wyclife. He made a number of followers during his time, who came to be known as Hussites. Reformers, in the later years, looked up to Huss for his unswerving commitment in the face of the church's cunning brutality, due to which he had to face extreme consequences. Condemning Huss' uprising, the Church first excommunicated him and then burned him to death, after an unfair trial. This brief account of his life will serve as a wonderful introduction to the life of this great hero of the faith. Despite incredible cruelty that lasted for many months, even some of his enemies acknowledged his humility and godliness. This book would be very useful to use in Family Worship as the chapters are all brief and to the point. Famous Church Historian J.H. Merle d'Aubigne said the following about Huss - "John Huss preached in Bohemia a century before Luther preached in Saxony. He seems to have penetrated deeper than his predecessors into the essence of Christian truth. He prayed to Christ for grace to glory only in his cross and the the inestimable humiliation of his sufferings. But his attacks were directed less against the errors of the Romish church than against the scandalous lives of the clergy. Yet he was, if we may be allowed the expression, the John the Baptist of the Reformation. The flames of his pile kindled a fire in the church that cast a brilliant light into the surrounding darkness, and whose glimmerings were not to be so readily extinguished." The following powerful testimony if found in Foxe's BOOK OF MARTYRS - "The bishops appointed by the Council [of Constance] stripped him of his priestly garments, degraded him, put a paper mitre on his head, on which was painted devils, with this inscription, 'A ringleader of heretics.' Which when he saw, he said: 'My Lord Jesus Christ, for my sake, did wear a crown of thorns; why should not I then, for His sake, again wear this light crown, be it ever so ignominious? Truly I will do it, and that willingly.' When it was set upon his head, the bishop said: 'Now we commit thy soul unto the devil.' 'But I,' said John Huss, lifting his eyes towards the heaven, 'do commend into Thy hands, O Lord Jesus Christ, my spirit which Thou has redeemed.' When the chain was put about him at the stake, he said, with a smiling countenance, 'My Lord Jesus Christ was bound with a harder chain than this for my sake, and why then should I be ashamed of this rusty one?' When the faggots were piled up to his very neck, the duke of Bavaria was so officious as to desire him to abjure. 'No,' said Huss, 'I never preached any doctrine of an evil tendency; and what I taught with my lips I now seal with my blood.' He then said to the executioner, 'You are now going to burn a goose, (Huss signifying 'goose' in the Bohemian language) but in a century you will have a 'swan' which you can neither roast nor boil.' If he were prophetic, he must have meant Martin Luther, who shone about a hundred years after, and who had a swan for his arms. The flames were now applied to the faggots, when our martyr sung a hymn with so loud and cheerful a voice that he was heard through all the cracklings of the combustibles, and the noise of the multitude. At length his voice was interrupted by the severity of the flames, which soon closed his existence. Then, with great diligence, gathering the ashes together, they cast them into the river Rhine, that the least remnant of that man should not be left upon the earth, whose memory, notwithstanding, cannot be abolished out of the minds of the godly, neither by fire, neither by water, neither by any kind of torment."