The Grace of Repentance by Sinclair Ferguson (Paperback) 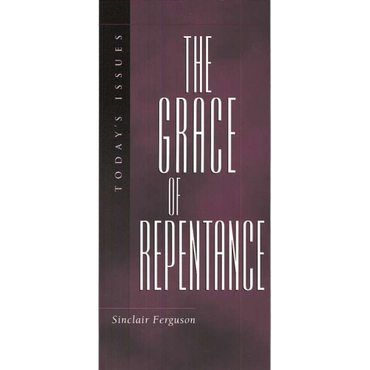 The Grace of Repentance by Sinclair Ferguson (Paperback)

When an unknown monk posted a placard of theological points on a church door, he did not know that he would cause a spiritual revolution that would still affect us hundreds of years later. But at the heart of the Reformation lay Martin Luther's great discovery, and a challenge that is still needed today: Repentance is not the action of a single moment, but a characteristic of a Christian's entire life. Sinclair Ferguson looks at the biblical definition of repentance, how some modern churches are repeating medieval errors, and the necessity of reformation. Whereas current teaching often belittles repentance, Ferguson believes that not only is it essential for salvation, it is the concrete expression of divine regeneration. When we see what we truly are--innately, inescapably sinful--we know our deep need for God's abundant grace. To this Ferguson declares, "According to Scripture, the Christian life is repentance from beginning to end! So long as the believer is at the same time righteous and yet a sinner, it can be no other way."

Sinclair B. Ferguson (PhD, University of Aberdeen) is professor of systematic theology at Redeemer Seminary in Dallas, Texas, and the former senior minister of the First Presbyterian Church in Columbia, South Carolina. He is the author of several books, the most recent being By Grace Alone: How the Grace of God Amazes Me. Sinclair and his wife, Dorothy, have four grown children.

How can Sinclair Ferguson equate grace and repentance together? Martin Luther made this statement, "When our Lord and Master, Jesus Christ, said 'repent,' he meant that the entire life of believers should be one of repentance." In this little booklet Ferguson reiterates Luther's great discovery from the reformation: "Repentance is a characteristic of the whole life, not the action of a single moment."

Ferguson defines repentance as "turning away from rebellion against God, and turning to God." Biblical repentance is made possible by God's grace and mercy and result in two things: (1) Recognizing that offenses have been committed against God and the covenant He has made with his people; and (2) Turning away from sin in view of the gracious provisions that the Lord has made for us in His covenant. "Repentance means returning to a spirit of creatureliness before the Creator in recognition of His mercy to penitent believers. Ungodliness is thus rejected and righteousness is embraced."

Repentance isn't a one time act, but is a change of mind that leads to a continual change of one's lifestyle. It is impossible to be saved without repentance. Ferguson writes, "Justification is by faith, not by repentance. But faith (and therefore justification) cannot exist where there is no repentance. Repentance is as necessary to salvation by faith as the ankle is to walking. The one does not act apart from the other. I cannot come to Christ in faith without turning from sin in repentance. Faith is trusting in Christ; repentance is turning from sin. They are two sides of the same coin of belonging to Jesus."

In the last several years the doctrine of biblical repentance as necessary for salvation and for sanctification has been radically neglected in our churches. Ferguson gives a robust theology of, and for repentance as the starting point for our justification and our ongoing sanctification. The Grace of Repentance is a thorough, clear, and concise primer on the biblical doctrine and application of the doctrine of repentance that is so neglected in our day. Ferguson does a wonderful job of showing how ongoing repentance changes our hearts, attitudes, and purposes as we seek to be formed and conformed to the image of Christ by the God who has begun a good work in us. Belief and ongoing repentance in Christ are essential habits for believers who are promised that "He who began a good work in us, will carry it on to completion until the day of Christ" by His mercy and grace in the power of the Holy Spirit (see Philippians 1:6)