The Grace of Godliness by Matthew Barrett (Paperback) 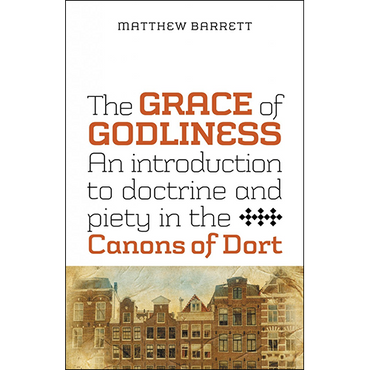 The Grace of Godliness by Matthew Barrett (Paperback)

When the pastors and theologians who comprised the Synod of Dort met in 1618 and 1619 to frame a response to the rise of Arminian theology in Dutch churches, they were concerned to provide not just theological argument but pastoral vision. They considered seriously the implications of right theology on both growth in grace and holiness and the spiritual comfort of believers.

Keenly aware of this vital link between theology and practice, they drew up the Canons of Dort in a manner that astutely rebutted from Scripture the Arminian Remonstrants, point by point, arguing the veracity of the doctrines of predestination, particular atonement, total depravity, effectual grace and the perseverance of the saints—the five points that have come to be known as ‘‘the doctrines of grace.”

Matthew Barrett opens a window on the synod’s deliberations with the Remonstrants and examines the main emphases of the canons, with special attention on their relationship to biblical piety and spirituality. For example, the doctrine of predestination is shown from Scripture to establish not just God’s electing grace but assurance of salvation—comforting believers that the God who saved them will preserve them to the very end. As Dr. Barrett examines the Canons of Dort it becomes clear why they are so important. Indeed, the piety and godliness that saturates these seventeenth-century canons shows they are as relevant for the church today as they were then.

Matthew Barrett (PhD, The Southern Baptist Theological Seminary) is Assistant Professor of Christian Studies at California Baptist University (OPS), as well as the founder and executive editor of Credo Magazine (www.credomag.com). He is the author of "The Grace of Godliness: An Introduction to Doctrine and Piety in the Canons of Dort," "Salvation by Grace: The Case for Effectual Calling and Regeneration," as well as the coeditor of "Four Views on the Historical Adam" (Zondervan's Counterpoints: Bible and Theology), and "Whomever He Wills: A Surprising Display of Sovereign Mercy."

"Wow! I really like this book. Matthew Barrett has given us history, theology, ministerial counsel and impetus to true piety in this treatment of the Synod and Canons of Dort. The brief but vibrant historical accounts are informative, his guidance in some thick theological discussion is expert, and his focus on piety leads us to the true purpose of all theology—the production of a sincere and pure devotion to Christ. Dr. Barrett’s continual insistence on the necessity of monergism for a truly biblical grasp of the character of salvation from beginning to end is a much needed emphasis for contemporary evangelicalism. The appendices provide valuable source material. This is an excellent account of a vitally important subject." — Tom J. Nettles, Professor of Historical Theology, The Southern Baptist Theological Seminary, Louisville, Kentucky

"Matthew Barrett offers a wonderfully simple and direct exposition of one of the more misunderstood confessions of faith. The Canons of Dort are often vilified, but under closer examination Barrett demonstrates that they are biblical and pastoral and a potent tonic for a flagging faith.Tolle et lege, take up and read!" — J.V. Fesko, Academic Dean, Professor of Systematic and Historical Theology, Westminster Seminary California

"By reducing the discussion of Calvinism and the doctrines of grace to the simplified acrostic T-U-L-I-P, I’m afraid we have generated far more heat than light. A book that looks deeply within, behind and around the five points of Calvinism is long overdue. Whether you find yourself saying “Yea” or “Nay” to the five points, we all need to say thank you to Dr. Barrett for his delightful, informative and light-generating book." — Stephen J. Nichols, Research Professor of Christianity and Culture, Lancaster Bible College, Lancaster, Pennsylvania

"Matthew Barrett has given us a thoroughly enjoyable introduction to and review of the history and the source documents of the Calvinist-Arminian debate. And with that he has given us a vivid reminder that a right understanding of these doctrines—in themselves considered and in the minds of the framers of the Canons of Dort—is indispensable to Christian worship and devotion. Highly recommended." — Fred G. Zaspel,Pastor, Reformed Baptist Church; Professor of Systematic Theology, Calvary Baptist Seminary, Lansdale, Pennsylvania

"Christians speak freely and often about the Canons of Dort and the international synod of 1618–1619 which produced them without really knowing much about either. Matthew Barnett’s The Grace of Godliness will do much to remedy this lamentable situation. In a very accessible manner, referring to a number of important background documents, Barrett provides the historical context of the Synod of Dort. He also makes a solid case that the Canons themselves are filled with careful biblical reflection, wise pastoral application and exhortations to a warm and genuine Christian piety. Dort’s stalwart defense of divine monergism in the salvation of sinners does not produce a fear of God, lack of assurance of one’s salvation or indifference to good works—as critics often charge. When read and understood, the Canons of Dort present the so-called doctrines of grace as the foundation for a believer’s confidence in God’s mercy and, as the consequence, the basis for a life of gratitude." — Kim Riddlebarger, Senior Pastor, Christ Reformed Church (URCNA), Anaheim, California; co-host of the White Horse Inn radio broadcast