The Gospel of John: Introduction, Exposition, and Notes 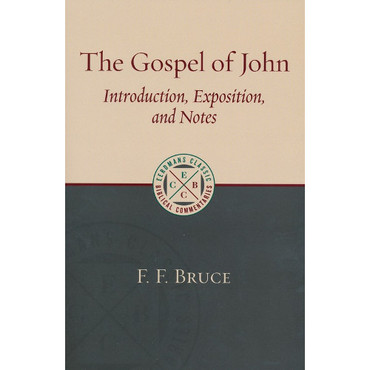 The Gospel of John: Introduction, Exposition, and Notes

In this popular commentary on the Gospel of John, first published in 1983, evangelical scholar F.F. Bruce leads readers through the rich and complex words of John the Evangelist with a careful verse-by-verse exposition of the Gospel’s text, its historical context, and its ongoing relevance for the Christian life.

Drawing on thirty years of research, Bruce introduces his commentary with discussions of the Gospel’s authorship, its significance for the early church, and its message. While based on solid biblical scholarship, this volume is especially suitable for general Christian readers interested in serious Bible study.

F. F. Bruce (1910-1990) was Rylands Professor of Biblical Criticism and Exegesis at the University of Manchester, England. Author of numerous commentaries and other books, he served as general editor of the NICNT series from 1962 to 1990.