The Five Giants and How to Fight Them: Lessons for Children of All Ages 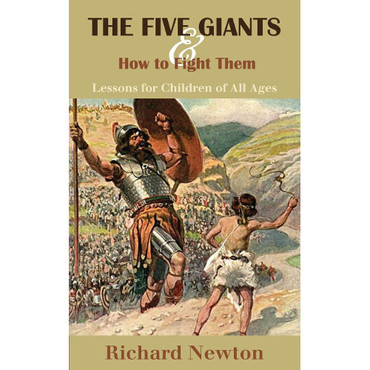 The Five Giants and How to Fight Them: Lessons for Children of All Ages

"There are giants in the earth in these days; and God expects us all to engage in the work of trying to fight them. When I speak of giants now, I do not mean physical giants, but moral giants. I do not mean men with huge bodies, four or five times larger than common-sized men; but I mean great sins of different kinds, which may well be called giants. I want now to speak about five giants that we should all unite trying to fight against. One of these is a good way off from us; but the rest are very near us. Listen to me while I tell you who these giants are, and the way in which we must try to fight them."

I. The first giant I am to speak of is the GIANT HEATHENISM. This giant doesn't live here. He is found in countries where the Gospel is not known. His castles may be seen in Africa, and in India, in China, and in the islands of the sea. He is a huge giant. This giant is very strong, and very cruel. Well, what are we to do to this giant? Why, we must fight him, as David did Goliath. The Bible is the brook to which we must go. The truths which it contains are the stones that we must use.

II. The second giant I would speak of is the GIANT SELFISHNESS. The giant selfishness never sees, or hears, or does anything for anyone but himself if you find that you are getting to think more of yourself than of others, then be sure the giant is after you. We must fight this giant by self-denial.

III. The third giant I want to speak about is the GIANT COVETOUSNESS. This giant is very large in size, and very strong in limb; but he has the tiniest tittle bit of a heart you ever saw, might put it in a nutshell. The only wonder is how so huge a frame can be supported by so little a heart. But this is not all, for little as his heart is, it is hard as stone. He is ashamed of his name, and won't answer to it. He pretends that his right name is — frugality. But this is a great story. Frugality is a very different person. He is a good, true, honest fellow If you ask, How are you to fight him? I answer, by learning to give.

IV. The fourth giant of which I will speak is the GIANT ILL-TEMPER. But how are we to fight against, this giant? I answer, By trying to be like Jesus. We always think of Him as — the "gentle Jesus, meek and mild." Do you suppose that this giant ever got a single link of his chain on Jesus? No.

V. The last giant I wish to speak about is the GIANT INTEMPERANCE. He is a very ugly-looking fellow When he is in a good humor, and feels jolly, he puts on a silly face, and looks very foolish. But when he gets in a passion he is awful looking, and it makes one shudder to see him.