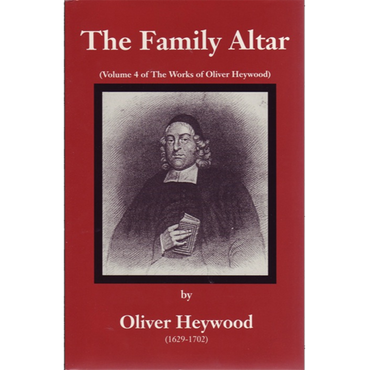 Few things have been so neglected or ignored by professing Christian in our day as the duty of families worshipping and praying together in their homes. The Puritans saw each family unit as a little church, with the father as the pastor of his own flock. Each passing generation has seen this duty at best abrogated to the mother; at worst it has been treated as irrelevant, or something for which there is simply no time in an ever-increasingly busy schedule. This fourth volume of The Works of Oliver Heywood deals primarily with the family. He begins with personal covenanting with God in baptism, then deals with the important duty of family worship, the proceeds to address the way God deals with families throughout Scripture and history, and then closes with the relationship between those who remain on earth with their loved ones in heaven.

Oliver Heywood (1629-1702) was born in March 1629, the son of Richard and Alice Heywood, in Little Lever, in the parish of Bolton. He was named for his grandfather, and was the fourth of nine children. He entered Trinity College, Cambridge, on July 9, 1647, from where he received his bachelor's degree. He began his ministry at Coley chapel in the parish of Halifax in 1650, and was ordained as a Presbyterian there in 1652. Oliver Heywood married Elizabeth Angier on April 25, 1655. From this union came three sons: John, Eliezer, and Nathaniel, who lived bu a short time. His wife, who was never very well, died on May 26, 1661. He remained a widower for over six years, before marrying Abigail Compton on June 27, 1667. Heywood was ejected in 1662 by the Act of Uniformity from his church in Halifax, but continued to preach for which he was excommunicated from the Church of England. He died May 4, 1702. His collected works fill five volumes.