The Everlasting Gospel of the Old and New Testaments by Charles H. Spurgeon 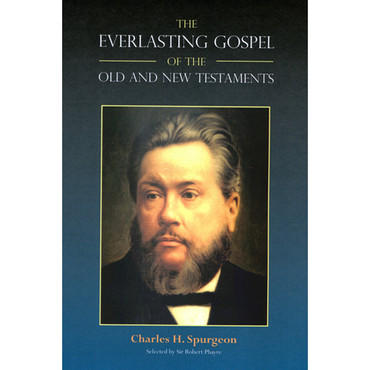 The Everlasting Gospel of the Old and New Testaments by Charles H. Spurgeon

Only a few days before Sir Robert Phayre received his Lord's summons, "Come up higher," he had completed the selection of Sermons here published, and given instructions for them to be bound in a volume for his own use. He had also chosen the title as printed on the present title-page, and the passage of Scripture (1 Peter 1:18-25) which he wished to have inserted there as a kind of motto for the whole series of discourses. The gallant general was a regular reader and an ardent admirer of Mr. Spurgeon's Sermons, and in his opinion the thirty-six here collected formed by themselves a most timely testimony against many of the prominent and pernicious errors and heresies of the present day. It is thought that many will wish to possess the volume compiled by this eminent Protestant and Evangelical leader so shortly before he went to join the beloved preacher in the presence of their Lord.

C.H. Spurgeon (June 19, 1834 – January 31, 1892) was a British Particular Baptist preacher who remains highly influential among Christians of different denominations, among whom he is still known as the "Prince of Preachers". This despite the fact that he was a strong figure in the Reformed Baptist tradition, defending the Church in agreement with the 1689 London Baptist Confession of Faith understanding, against liberalism and pragmatic theological tendencies even in his day.