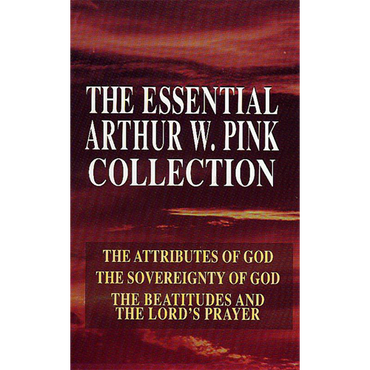 The Attributes of God, The Sovereignty of God, and The Beatitudes and the Lord's Prayer—three works by Arthur W. Pink that, together in one volume, present the core of this beloved author's teachings.

Born in Nottingham, England in 1886, Arthur Walkington Pink was converted to Christ while a spiritualist medium. He briefly attended the Moody Bible Institute in Chicago, Illinois, in 1910, before taking up his first pastorate at Silverton, Colorado. Little-known to the outside world, he pastored other churches in the United States and Australia before finally returning to his homeland in 1934. Settling in Stornoway on the Isle of Lewis, Scotland, there he died almost unnoticed in 1952. By that date, however, the magazine he had started in 1922 – Studies in the Scriptures – was feeding several of the men who were leading a return to doctrinal Christianity, including Martyn Lloyd-Jones and Douglas Johnson (founder of Inter-Varsity) and, in book form after his death, his writings became very widely read across the world. The Trust publishes his The Sovereignty of God, Gleanings from Paul, Profiting from the Word, The Life of Elijah, and a number of titles which have been translated into Spanish.