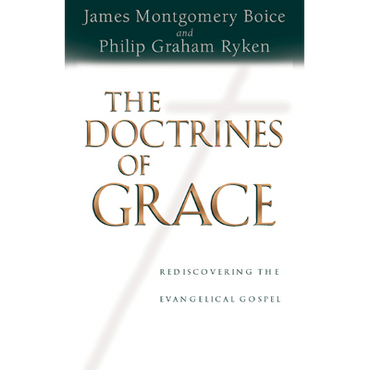 There is no question that we live in an age of weak theology and casual Christianity. We have substituted intuition for truth, feeling for belief and immediate gratification for enduring hope. Evangelicalism desperately needs to return to the doctrines that once before reformed the world: radical depravity, unconditional election, particular redemption, efficacious grace and persevering grace. James Boice and Philip Ryken not only provide a compelling exposition on these doctrines of grace, but also look briefly at their historical impact. The authors leave no doubt that the church suffers when these foundational truths are neglected and that she must return to a Christianity that is practical-minded, kind-hearted, and most importantly, biblically based.

JAMES MONTGOMERY BOICE was senior minister of the historic Tenth Presbyterian Church in Philadelphia for thirty years and a leading spokesman for the Reformed faith until his death in June 2000.

Philip Graham Ryken (DPhil, University of Oxford) is the eighth president of Wheaton College. Formerly, he served as senior minister of Philadelphia’s historic Tenth Presbyterian Church. He has written or edited more than 40 books, including the popular title Loving the Way Jesus Loves, and has lectured and preached at universities and seminaries worldwide.

This work is a collaborative effort of the late James Montgomery Boice and his successor at Tenth Presbyterian Church in Philadelphia, Philip Ryken. This is not a book that will make everyone happy because it deliberately intends to chasten contemporary evangelicalism on a number of fronts. But I felt that it was a very good introduction to Reformed theology that both seasoned theologians and amateurs to theological thought can profit from.
The controversial nature of the book begins in the first sentence of the first chapter, when it announces that evangelicalism stands or falls with Calvinism, as B.B. Warfield once remarked. From this, the authors lament what they believe is the state of thorough worldliness that has established residency within the evangelical church, and their belief that a return to the core tenets of Reformed theology is the best and only effective antidote.
From there, a solid introductory analysis of the 5 points of Calvinism is given. I found that these analyses were pretty thorough, yet very readable and understandable at an introductory level. In contrast to the rather elevated language of folks like Kuyper, Boettner, Machen, Warfield, and Hodge, Boice and Ryken bring the fundamentals of Reformed theology down to a layperson's level while still being unapologetic about these beliefs. In this analysis of the 5 points, the authors effectively take on some of the more common objections to Reformed theology that tend to surface, although again, because of the introductory nature of the book, the reader should not expect full orbed and exhaustive rebuttals here. The one rebuttal that I thought was especially insightful was where the authors, while responding to the objection that Reformed theology relies too much on the 'two wills of God' to harmonize their theology, point out that the free-will theists who tend to voice this objection engage in exactly the same thing by suggesting by default that in contrast to God's revealed will in the Bible, God's primary purpose (or secret will) is in preserving the supposed free will of man. Very insightful point.
The authors also devote a great deal of time both to analyzing the fruits of Calvinism in history, as well as presenting a Calvinist life view that penetrates all aspects of life and civilization. On the latter point, the authors appear to pattern the Calvinist worldview heavily upon the views of Kuyper as articulated at Princeton over 100 years ago. While I found this section to be very good and very refreshing in many ways, it should be understood by the reader that Calvinism has not historically been, nor is currently monolithic in how it views the believer's attitude and involvement in politics, science, art, and other areas. Nonetheless, I found that Boice and Ryken offered some very good thoughts in this area.
Overall, I highly commend this book to someone who is interested in studying and learning about the Reformed faith, especially those who are just beginning this journey. This book is very helpful for those who are new to theology, but is also quite useful to those with more experience in this area. A very good book.