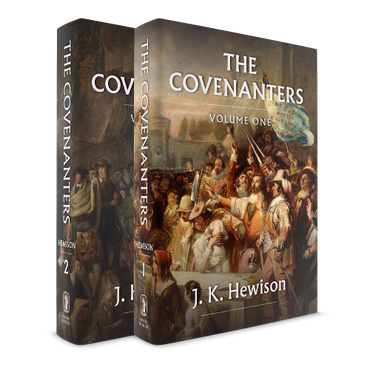 From the Preface by the Author

The first edition of The Covenanters had a gratifying reception from students of Scottish history. The late Mr. Andrew Lang thus characterised it: — ‘The truth about the Reformation and about the whole unhappy history of Scotland from 1540 to 1690 is not ce qu’un vain peuple pense [what vain people think]. Dr. Hewison’s two lordly volumes on that period, The Covenanters, give only the traditional view expressed with extraordinary vigour and rigour.’

The demand, expressed in many quarters, that the general public should acquire this work in a cheaper form, has led to the preparation of this edition. The volumes are substantially the same as their predecessors. It was necessary, however, to make some emendations; and, as a result of a fresh survey of authorities and the study of recently discovered historical data, to give a new setting to some memorable episodes, as well as to modify the characterisations of some distinguished personages. The publication in 1911 of the Diary of Sir Archibald Johnston of Wariston has necessitated changes in the account of the first subscription of the 1638 Covenant. A completer list of examples of the Covenants still preserved is furnished in Appendix iii and iv, Volume i. Appendix vii, Volume i., has also been rewritten.

The book will again have achieved its purpose if other readers can homologate the criticism of Professor Herkless (The Glasgow Herald, March 17, 1908). ‘The value of this book lies in the fact that it shows the men of the Covenants and their deeds in such a way that the student of history may calmly judge them, and be assured at the same time that in making his judgment he has before him the available relevant facts.’

James King Hewison (1853–1941) was a minister in the Church of Scotland and a church historian and antiquary. He wrote many books and articles, focussing especially on the region of southwest Scotland. He was best known for his two-volume work on The Covenanters, which is here re-issued.

‘We all owe you a deep debt of gratitude for that wonderful book — The Covenanters.’ — LORD GUTHRIE, 1908

‘His history is a triumphant vindication of the place which belongs to the Covenanters in the making of Scotland.’ — THE EXPOSITORY TIMES, 1908

‘Dr Hewison has written a great book, one for which all true Scotsmen will thank him.’ — REV. ALEXANDER SMELLIE, 1908