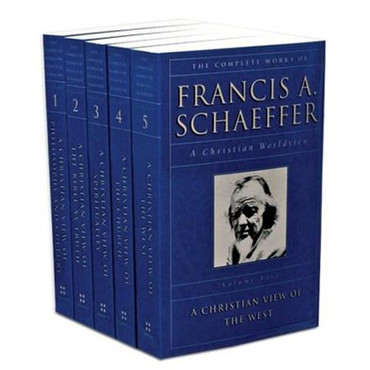 Dr. Schaeffer was one of the 20th century's champions of reasoned faith. Though he died in 1984, his influence continues through his writings. This affordable set contains all 22 of Schaeffer's books. Five indexed 6" x 9" softcovers, from Crossway Books.
Titles include:

The God Who is There
Escape from Reason
He is There and He is Not Silent
Back to Freedom and Dignity
Genesis in Space and Time
No Final Conflict
Joshua and the Flow of Biblical History
Basic Bible Studies
Art and the Bible
No Little People
True Spirituality
The New Super-Spirituality
Two Contents, Two Realities
The Church at the End of the Twentieth Century
The Church Before the Watching World
The Mark of a Christian
Death in the City
The Great Evangelical Disaster
Pollution and the Death of Man
How Should We Then Live?
Whatever Happened to the Human Race?
A Christian Manifesto

Francis A. Schaeffer (1912–1984) authored more than twenty books, which have been translated into several languages and have sold millions globally. He and his wife, Edith, founded L'Abri Fellowship international study and discipleship centers. Recognized internationally for his work in Christianity and culture, Schaeffer passed away in 1984 but his influence and legacy continue worldwide.