The City of God by Saint Augustine (Paperback) 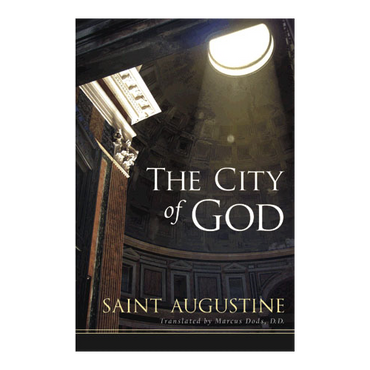 The City of God by Saint Augustine (Paperback)

The human mind can understand truth only by thinking, as is clear from Augustine. —Saint Thomas Aquinas Saint Augustine of Hippo is one of the central figures in the history of Christianity, and this book is one of his greatest theological works. Written as an eloquent defense of the faith at a time when the Roman Empire was on the brink of collapse, it examines the ancient pagan religions of Rome, the arguments of the Greek philosophers and the revelations of the Bible. Pointing the way forward to a citizenship that transcends worldly politics and will last for eternity, this book is one of the most influential documents in the development of Christianity. One of the great cornerstones in the history of Christian thought, The City of God is vital to an understanding of modern Western society and how it came into being. Begun in A.D. 413, the book’s initial purpose was to refute the charge that Christianity was to blame for the fall of Rome (which had occurred just three years earlier). Indeed, Augustine produced a wealth of evidence to prove that paganism bore within itself the seeds of its own destruction. However, over the next thirteen years that it took to complete the work, the brilliant ecclesiastic proceeded to his larger theme: a cosmic interpretation of history in terms of the struggle between good and evil. By means of his contrast of the earthly and heavenly cities—the one pagan, self-centered, and contemptuous of God and the other devout, God-centered, and in search of grace—Augustine explored and interpreted human history in relation to eternity.

Aurelius Augustinus, Augustine of Hippo (November 13, 354-August 28, 430) is a saint and the pre-eminent Doctor of the Church according to Roman Catholicism; he was the eldest son of Saint Monica. In the Eastern Orthodox Church, which does not accept all of his teachings, he is usually called "Blessed Augustine." Many Protestants consider him to be a spiritual ancestor of Protestantism, in the sense that Protestantism's founder Martin Luther was deeply influenced by him (Luther was trained as an Augustinian monk).

St Augustine's City of God is a work for the ages. It was not only a great apologetic to the Christian faith of the 5th century; it is an apologetic to Christian faith for all centuries. It is the story of history unfolded in two exact opposite cities. It is the struggle between the two cities against one another. It is the story of the fall, grace, redemption, and salvation of man for those who live in the city of God. For those of the other city, it is the exact opposite. It is the story of the fall, judgment, damnation and ultimate destruction of those who loved themselves more than they loved God. This was the story of love, by one of the greatest saints of the Catholic Church, Saint Augustine, Bishop of Hippo.
The reason I give 4 stars out of 5 is because of the amazing difficulty that comes with reading this book. This is a VERY VERY heavy read, and one should be familiar with the prevailing Roman philosophies of the day, as well as Roman history.
Augustine talks of Plato, Cicero, Virgil and others frequently through the book. He also talks of the history of Rome, and these factors play a heavy note in his book. An few survey classes of Philosophy, and a World Civics class as well as a decent understanding of Christian history at this time, and theology is also a must. You should be familiar with the scriptures. Because of all these factors, you cannot just pickup and read this book. You'll have to know what Augustine is talking about to some level before you read this.
Other than that, this book is brilliance, and while some parts will be a little dry, it is very inspiring. You see Augustine write, sign, and stamp the doctrine of Original Sin, Amillinialism, and doctrines concerning Grace, the Trinity, and various "problems" concerning the Canon of Scripture.