The Christian Attitude Toward War by Loraine Boettner 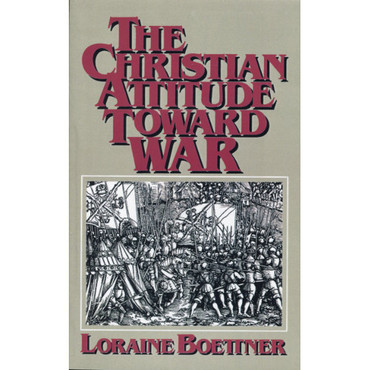 The Christian Attitude Toward War by Loraine Boettner

“Sometimes we hear it said that all war is wrong—wrong for the defenders as well as for the aggressors—and that even when waged with the sincere purpose of restraining evil, it tends to produce greater evils than those against which it is directed.”

It was in response to that view that Loraine Boettner wrote this compelling volume, first published in 1940. Now in an updated, third edition, Dr. Boettner brings biblical and historical data to bear upon issues of mounting concern, such as:

Boettner’s crisp analysis of these and other issues makes this book a valuable and enduring statement on the ever-crucial matters of war and peace.

Loraine Boettner (ThB and ThM, Princeton Theological Seminary; also received honorary degrees in DD and LittD) is best known as the author of The Reformed Doctrine of Predestination, The Millennium, and Roman Catholicism.