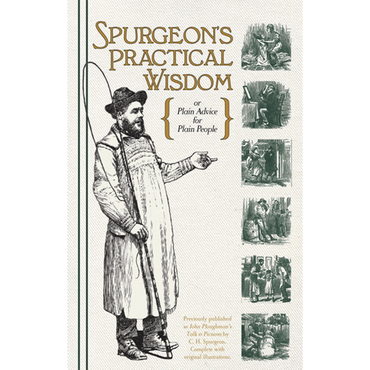 A prolific author and pastor, Charles Haddon Spurgeon (1834-1892) remains a respected and influential source of inspiration and study. His classic collection of devotions for morning and evening remain a beloved treasure of wisdom and teaching for Christians.

It has sometimes been said that Christians are ‘too heavenly minded to be of any earthly use’. While that may apply to some, it could never be said of Charles Haddon Spurgeon. Spurgeon combined heavenly mindedness with zeal to improve the lot of ordinary people. At the height of his ministry there were dozens of enterprises associated with his Metropolitan Tabernacle that served the spiritual and practical needs of men and women, boys and girls.

Although Spurgeon is best remembered as a gospel preacher, he was also a gifted writer. Under the not so well disguised pseudonym of ‘john Ploughman’, a wise old country farm worker, Spurgeon penned a number of humorous articles on topical subjects for his monthly magazine The Sword and the Trowel. ‘I have somewhat indulged the mirthful vein, but ever with so serious a purpose that I ask no forgiveness’, he wrote. In these articles he ‘aimed blows at the vices of the many’ and tried to inculcate ‘those moral virtues without which men are degraded.’ His efforts met with great success. When later published, John Ploughman’s Talk and John Ploughman’s Pictures were an instant hit with sales of these two volumes exceeding 600,000 in the author’s own lifetime. In homes throughout the length and breadth of Great Britain Spurgeon’s practical wisdom on subjects such as alcohol, debt, anger, temptation, cruelty, and the family home, were heeded and cherished. In the preface to John Ploughman’s Pictures, he was able to write: ‘John Ploughman’s Talk has not only obtained an immense circulation, but it has exercised an influence for good. Although its tone is rather moral than religious, it has led many to take the first steps by which men climb to better things.’

This fine edition of Spurgeon’s Practical Wisdom, which also includes all of the illustrations from the original two volumes, will surely enrich many a Christian home and be treasured by a new generation of readers.

You will never go wrong with Charles H. Spurgeon. Spurgeon's wit is only surpassed his knowledge of Scripture. He was so near our Lord that you can read any of his works again and again; then like the Bible, one learns something different with each visit.