Some Pastors and Teachers by Sinclair B. Ferguson 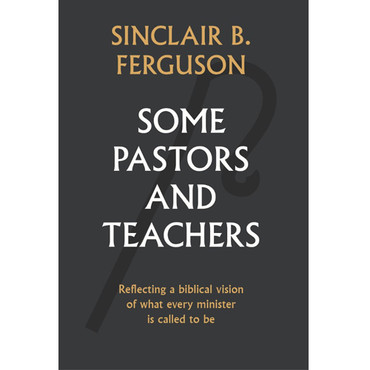 Some Pastors and Teachers by Sinclair B. Ferguson

Some Pastors and Teachers is a volume for every minister’s study and indeed for the bookshelves and bedside tables of everyone who has a concern for the ministry of the gospel and the well-being of the church in the twenty-first century. In many ways, it reflects the biblical vision of what every minister is called to be: pastor, teacher, counsellor, and example—but also a man who is growing spiritually, both in understanding and in character, before the eyes of his congregation.

In five sections and thirty-nine chapters, Sinclair B Ferguson writes on pastor-teachers whose life and work have left an indelible mark on his own life, and then leads us in a series of chapters on the teaching of John Calvin, John Owen and the seventeenth century Puritans. This is followed by studies of Scripture, the ministry of the Spirit, the nature of Biblical Theology, the work of Christ, adoption, the nature of the Christian life and other important doctrines. The final section discusses various aspects of preaching, including preaching Christ from the Old Testament, the importance of theology, reaching the heart, and concludes with a decalogue for preachers. All this, as the epilogue makes clear, is set within the context and goal of doxology.

Here is a book to return to again and again, for instruction, for challenge, and also for enjoyment. While written particularly with ministers in view its style makes it accessible to all. Dr Ferguson describes Some Pastors and Teachers as a series of small gifts for fellow-ministers and others, written as an expression of the love of Christ. It is calculated to help both ministers of the gospel and entire congregations to realize Paul’s vision of churches growing up into Christ as they are nourished and taught by their pastors and teachers.

Sinclair Buchanan Ferguson retired in 2013 as Senior Minister of First Presbyterian Church in Columbia, South Carolina, and returned to his native Scotland. Prior to this he held the Charles Krahe chair for Systematic Theology at Westminster Theological Seminary and served Church of Scotland congregations in Unst (Shetland) and Glasgow (St George’s Tron). He received his Ph.D. from the University of Aberdeen (1971).