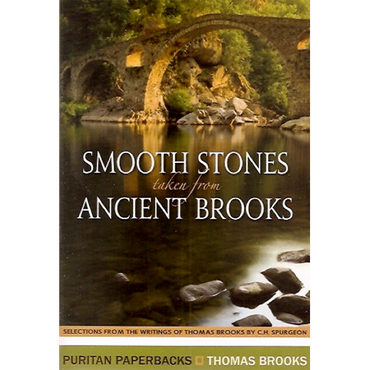 As a writer, Brooks scatters stars with both his hands: he hath dust of gold; in his storehouse are all manner of precious stones." So wrote C.H. Spurgeon in his Preface to this book. He counted Thomas Brooks among his favourite Puritan authors, and it is not hard to see why. Brooks' popularity lies both in his subjects - practical truths, central to the Christian life - and in the manner of his presentation. He is ever direct, urgent, fervent, full of Scripture, and able to choose words which make his sentences stick in one's mind.

This book is a collection of sentences, illustrations, and quaint sayings from this renowned Puritan. Gathered by Spurgeon out of the 6 volume set of Brooks' Works, it remains an excellent introduction to both the man and his writings.

Spurgeon continues, "Reader, thou hast here presented to thee, in a cheap and readable form, the choice sayings of one of the King's mighties. The great divine who wrote these precious sentences was of the race of the giants. He was head and shoulders above all the people, not in his stature (like Saul), but in mind, and soul, and grace. Treasure these gems, and adorn thyself with them, by putting them into the golden setting of holy practice, which is the end the writer always aimed at. Use these 'smooth stones' as David of old, and may the Lord direct them to the very forehead of thy sins, for this is the author's main design! One of these pithy extracts may assist our meditations for a whole day, and may open up some sweet passage of Scripture to our understandings, and perhaps some brief sentence may stick in the sinner's conscience, like an arrow from the bow of God. So prays the servant of Christ and his church. C.H. Spurgeon".

Little is known about Thomas Brooks as a man, other than can be ascertained from his many writings. Born, probably of well-to-do parents, in 1608, Brooks entered Emmanuel College, Cambridge, in 1625. He was licensed as a preacher of the gospel by 1640 at the latest. Before that date he seems to have spent a number of years at sea, probably as a chaplain with the fleet. After the Civil War, Brooks became minister at Thomas Apostle's, London, and was sufficiently renowned to be chosen as preacher before the House of Commons on 26 December, 1648. Three or four years later he moved to St Margaret's, Fish-street Hill, London, but encountered considerable opposition as he refused baptism and the Lord's Supper to those clearly 'unworthy' of such privileges. The following years were filled with written as well as spoken ministry. In 1662 he fell victim to the notorious Act of Uniformity, but he appears to have remained in his parish and to have preached the Word as opportunity offered. Treatises continued to flow from his agile pen. In 1677 or 1678 he married for the second time, 'she spring-young, he winter-old'. Two years later he went home to his Lord.