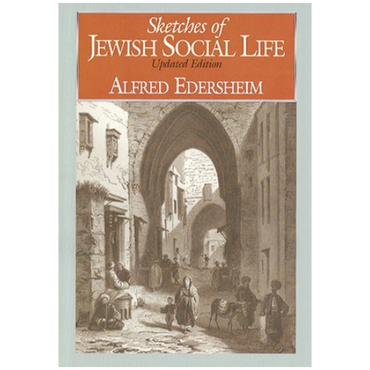 Alfred Edersheim (1825–89) was a Vienna-born biblical scholar who converted from Judaism to Christianity. A veteran minister and missionary to the Jews of Romania, Edersheim left an enduring and priceless legacy to followers of Christ. Among his most widely read works are The Life and Times of Jesus the Messiah, The Temple: Its Ministry and Services, and Bible History Old Testament.

For the first time since it originally appeared, this classic work has been newly typeset in an easy-to-read modern typeface, making reading, studying, consulting easier than ever before. The most relevant citations of Scripture, rabbinic sources, and the works of Philo and Josephus are supplied to complement Edersheim's masterful assessment of the writings of Jesus' day. This makes bland references come alive, in many cases shedding invaluable light on difficult passages or capturing the deep devotion. Edersheim brings to the task of understanding the world of Jesus and his disciples. The scenes portrayed by Edersheim's hand come alive in the more than 50 carefully selected illustrations, maps, photos, and drawings. Enhanced both aesthetically and practically, this edition of Sketches of Jewish Social Life has no rival. Edersheim's notes remain indispensable for unlocking the mysteries of the ancient world. Always sensitive to the priority of God's Word, Edersheim takes the reader back to the Bible time and again to show the authority behind his writing. Readers know they will receive reliable primary and secondary resources in these helpful notes.

If an American was writing a book meant to be read by today's Americans, he would routinely use phrases such as "they went through a drive in" or "9 to 5" without giving it a second thought. He'd be confident that every reader would know what was meant by those words and wouldn't fill his pages with lengthy explanations of every day items. The early writers of the New Testament also assumed that the readers of their writings would know what words Christ prayed over the cup at the Last Supper, why a bunch of virgins were waiting for hours outside the bridal door and what Paul would be doing sitting around on his roof when he has the vision. However, many of us in the modern world have wondered about these "curosities". Edersheim clears them up with his extensive research and thorough examination of the Jewish life in the time of Christ. This is the world the New Testament was originally written for and Edersheim fills in the gaps the early writers left in the "common knowledge" of the day. The book, while rich in theology, is easy and entertaining to read. It sheds light on the Bible and brings to life the scriptures. It will enlighten and enrich every Christian from the oldest scholar to the newest convert.