Signs of the Apostles: Observations on Pentecostalism Old and New by Walter J. Chantry 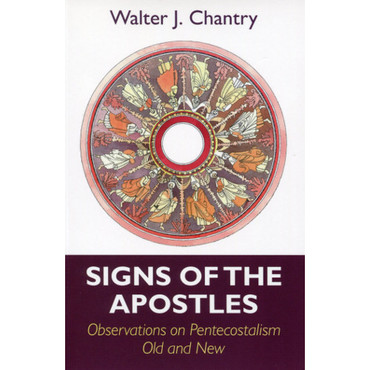 Signs of the Apostles: Observations on Pentecostalism Old and New by Walter J. Chantry

How should the Christian assess the contemporary claims about spiritual gifts? In Signs of the Apostles Walter Chantry describes the worldwide spread of the charismatic movement and discusses its significance. He believes God is still working in the world today. But it is his conviction that miraculous powers are no longer placed in the hands of individual men and women. Every recorded instance of the reception of miraculous power in the New Testament Church occurred through the ministry of an Apostle. Now that the canon of Scripture is complete, the pursuit of all the spiritual gifts of the apostolic age can only proceed upon the basis of a failure to recognize the sufficiency and finality of the Bible. This short work is written with clarity and vigour. It carefully distinguished some kinds of charismatically-inclined Christians from others. It poses questions with which every Church member is faced. Chantry’s answers tally with those of the greatest leaders of the Church during the Christian centuries. From Psalm 85 he outlines the true character of revival, and closes the book with material drawn from the Great Awakening of the 18th century.

Walt Chantry was born in 1938 in Norristown, Pennsylvania. He was raised in the Presbyterian Church and was converted to Christ as a teenager. He graduated from Dickinson College in 1960 with a B.A. in History, and went on to receive a B.D. from Westminster Theological Seminary in 1963.

That same year he was called to be pastor of Grace Baptist Church in Carlisle, Pennsylvania where he served the Lord for the next 39 years.

Soon after his retirement in 2002 he was asked to be the editor of The Banner of Truthmagazine and continued in this ministry for seven years. Walt and his wife Joie now reside in Waukesha, Wisconsin.