Sermons on the Acts of the Apostles: Chapters 1-7 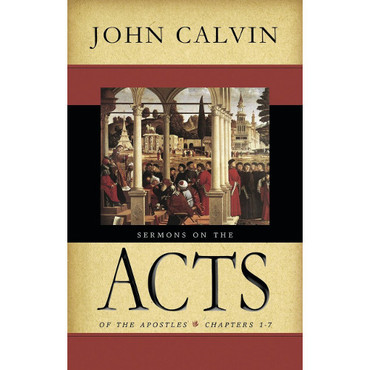 Sermons on the Acts of the Apostles: Chapters 1-7

How to answer the question ‘Is your conscience at peace?’ A reading of any or all of these forty-four extant sermons on Acts by John Calvin will help the reader determine whether his conscience is at peace or simply asleep!

Calvin’s vigorous presentation of the gospel of Jesus Christ in its full extent shows the sixteenth-century expositor understood the ramifications of New Testament theology, just as did his mentor, the apostle Paul, who, after presenting his reasoned understanding of the meaning of Christ’s work, immediately follows it with the ‘therefore’ of consequence. Calvin mixes biblical teaching and its demands on the believer’s life together so closely that the theology and its effects cannot be easily separated. Divine judgment and mercy underlie this ‘effects theology’, and it is the sense of judgment versus the promises of and the conditions for forgiveness and acceptance that informs the reader’s conscience whether he is indeed forgiven and at peace, a member of the body of Christ.

On the other hand, the reader of the sleeping conscience, by comparison and self-examination, will be incited to awaken to a new or renewed relationship with the pressing demands of Christian ‘effects theology’. Calvin pulls no punches. If belief does not end in an increasingly Christlike character, it is as good as no belief, no theology. The reader is either at peace or asleep.

‘One wonders, after perusing any sequence of Calvin’s sermons, whether Calvin would be welcomed in many Protestant, even Presbyterian, pulpits today. Calvin is hailed for his biblical theology, but largely ignored with respect to his insistence upon the transformed-life, life-long self-abnegation demanded of genuine Christian discipleship. The motive behind his insistence arises from his acute awareness that God, after expressing his fatherly love and gracious acceptance of the wayward, remains the uncompromising judge of all humankind, Christian or not. That awareness of judgment should, Calvin says, “make our hair stand on end” and drive us to repentance, without which there is no forgiveness.’

‘It is hoped that the reader of these sermons will seek not just to confirm the sermons’ agreement with Calvinistic theology, but particularly to experience Calvin’s sincere and profound personal response to the loving and merciful God whose Son is on the threshold of judging with finality the whole world with mercy and justice.’

John Calvin (10 July 1509 – 27 May 1564) was an influential French theologian and pastor during the Protestant Reformation. He was a principal figure in the development of the system of Christian theology later called Calvinism. Originally trained as a humanist lawyer, he broke from the Roman Catholic Church around 1530. After religious tensions provoked a violent uprising against Protestants in France, Calvin fled to Basel, Switzerland, where in 1536 he published the first edition of his seminal work Institutes of the Christian Religion.

In that year, Calvin was invited by William Farel to help reform the church in Geneva. The city council resisted the implementation of Calvin and Farel's ideas, and both men were expelled. At the invitation of Martin Bucer, Calvin proceeded to Strasbourg, where he became the minister of a church of French refugees. He continued to support the reform movement in Geneva, and was eventually invited back to lead its church. Following his return, he introduced new forms of church government and liturgy, despite the opposition of several powerful families in the city who tried to curb his authority. During this period, Michael Servetus, a Spaniard known for his heretical views, arrived in Geneva. He was denounced by Calvin and executed by the city council. Following an influx of supportive refugees and new elections to the city council, Calvin's opponents were forced out. Calvin spent his final years promoting the Reformation both in Geneva and throughout Europe.