Sampler from A Way to Pray by Matthew Henry (Paperback) 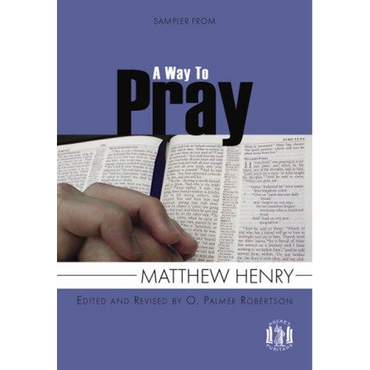 Sampler from A Way to Pray by Matthew Henry (Paperback)

‘To read the work of a Puritan doctor of the soul is to enter a rich world of spiritual theology to feed the mind, heart-searching analysis to probe the conscience, Christ-centred grace to transform the heart, and wise counsel to direct the life. This series of Pocket Puritans provides all this in miniature, but also in abundance.’ — SINCLAIR B. FERGUSON

Matthew Henry's A Method for Prayer (1710) consists almost entirely of Scripture, under various headings, to help Christians pray in harmony with the truth of God. It has been revised by O. Palmer Robertson to allow the language of prayer to be expressed in today's idiom. This Pocket Puritan is a sampler for that larger work. It is sent out with confidence that God will honor his Word, as it is redirected back to him in the form of heartfelt prayer.

Matthew Henry was born at Broad Oak, Flintshire, in October 1662, into the godly home of Philip and Katharine Henry, less than two months after his father was ejected under the Act of Uniformity from ministry in the Church of England. He began work on his famous Commentary on the Whole Bible in 1704, completing it from Genesis to Acts by his death ten years later. Several of his fellow ministers compiled the remainder of the Commentary (Romans to Revelation) primarily from Henry s own notes and writings. While still at Chester, Henry also completed his A Method for Prayer with Scripture Expressions proper to be used under each head.