Right Reason and the Princeton Mind: An Unorthodox Proposal by Paul Kjoss Helseth 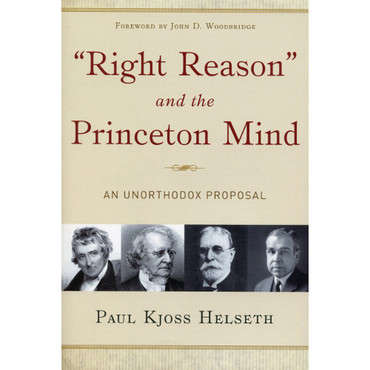 Right Reason and the Princeton Mind: An Unorthodox Proposal by Paul Kjoss Helseth

According to the “orthodox” consensus, the Presbyterian professors at Old Princeton Seminary (1812–1929), influenced by Common Sense Realism and Baconianism, betrayed traditional Reformed theology by their alleged claim that human reason was in certain significant ways unaffected by the fall.

Through a masterful examination of the Old Princetonians’s writings, Paul Helseth’s unorthodox proposal turns the orthodox interpretation on its head, showing what Alexander, Hodge, Warfield, and others actually believed regarding reason’s powers and the way theology should be constructed.

2. A ‘Rather Bald Rationalism’?

3. The Task of Christian Scholarship

4. The Critique of Theological Liberalism

7. Conclusion: The Role and Function of Doctrine

"A notable example of intellectual reclamation and recovery. Sensitively and knowledgeably discusses the issues of faith and reason, particularly in relation to apologetics, and then assesses the strength of the critique of ‘post-conservative orthodoxy’ against the Princeton theology." — Paul Helm, Regent College

"His argument is cogent, and it clears away the debris of unjust criticism so that we can again be delighted in the insights of Old Princeton Calvinism. As it turns out, the Old Princetonians are an attractive alternative to the confusions of modern liberalism and postfoundationalism." — John Frame, Reformed Theological Seminary

"Shows that Archibald Alexander, Charles Hodge, B. B. Warfield, and their peers were theologians of the heart, in essential continuity with the Reformation approach." — William Edgar, Westminster Theological Seminary