Resurrection and Eschatology: Theology in Service of the Church by Various Authors (Hardcover) 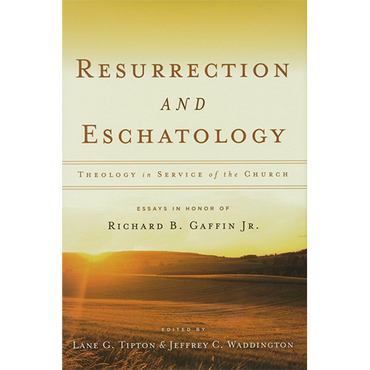 Resurrection and Eschatology: Theology in Service of the Church by Various Authors (Hardcover)

The purpose of the volume is to express appreciation for the life and ministry of Richard B. Gaffin Jr. at Westminster Theological Seminary and in the Orthodox Presbyterian Church. The book is organized into two sections: (1) the academy and (2) the church. The first section contains a host of essays focused on Gaffin’s theological contributions in key areas of biblical and theological studies. The second section highlights Gaffin’s service to the Orthodox Presbyterian Church and contains anything from reflections on Gaffin’s work in the church to sermons that demonstrate his theological influence.

"Resurrection and Eschatology" is a festschrift in honor of RIchard B. Gaffin, Jr. It consists of 22 insightful articles by well-respected scholars such as D.A. Carson, Vern Poythress, Scott Oliphant, Peter Lillback, and many others. Unlike some anthologies, where the quality of writing and scholarship is uneven, every article in "Resurrection and Eschatology" is well-written, understandable, and contains considerable theological, apologetic, or interpretive meat.

Among the efforts that I found particularly interesting are the following:

Scott Oliphant's article entitled "Something Much Too Plain To Say." In it he considers a certain set of anti-theological arguments designed to show that the concept of God is self-contradictory. He shows how these arguments can be successfully countered by a true understanding of the divine "condescension." I found his discussion of the "extra Calvinisticum" and its relevance to the issue to be especially enlightening.

Dennis Johnson's study of Romans 7:13-25 is one of the best that I have read on this passage that has given rise to all sorts of interpretations. Although I am still not sure that I agree with all of Johnson's conclusions, he gives the reader more than enough to chew on for a considerable amount of time.

Anyone interested in serious theological reflection will benefit from reading the articles in this work. It is worth every penny of the purchase price.