Preparation For Ministry by Allan Harman 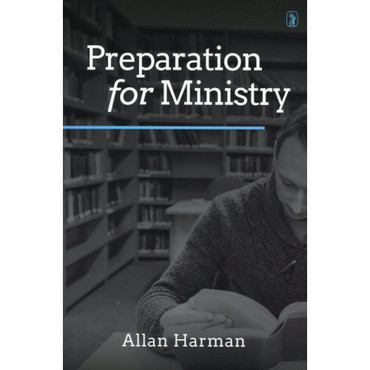 Preparation For Ministry by Allan Harman

Preparation For Ministry deals with important issues relating to a call to the Christian ministry, theological training, and entry into pastoral work.

The author has written it out of his own rich experience as a student, a pastor, and a seminary teacher. Those contemplating entry into the Christian ministry will benefit greatly from his practical advice on such subjects as coming to faith, the call to the ministry, pre-theological study, and choosing a theological college or seminary.

Those already in theological training or who have recently entered into ministry will also find much to help them within these pages on such topics as the theological course, early ministry, and staying fresh.

A brief bibliography is provided, and the book also contains useful appendices, including:

After his initial theological training, he returned to Australia to pastor Geelong Presbyterian Church of Eastern Australia, to which he was ordained and inducted in March 1962.

After doctoral studies at Westminster Theological Seminary in Philadelphia (1964-66), Allan began his long career as a Professor of Old Testament, first at the Free Church of Scotland College in Edinburgh (1966-74), and then back in his native Australia at the Reformed Theological College, Geelong (1974-77). While at the RTC he taught part-time in the newly re-started theological education programme of the Presbyterian Church of Victoria, following the departure of all of the previous faculty when the Uniting Church came into existence in 1977. This led to his appointment as a professor at the Presbyterian Theological College, Melbourne, serving there from 1978 until his retirement in 2001. He was the Principal at PTC from 1982 until 2001, and maintains the connection with it as a Research Professor. His work in theological education was recognised by the award of an honorary doctorate (ThD) from the Australian College of Theology in 2003.

He has preached and lectured throughout his ministry, both in Australia and overseas, at places such as the Tyndale University College and Seminary in Toronto, Reformed Theological Seminary in Jackson, Mississippi, and Kosin University in Busan, South Korea.

Allan has written a number of commentaries on Old Testament books (Deuteronomy, Psalms, Isaiah, Daniel, Amos). He also has a strong interest in history, and The Story of the Church, by himself and Dr A M Renwick, has been a standard introduction to church history. He has a special interest in the history of biblical commentators. This led to the writing of a biography of Matthew Henry, and also to the preparation for publication of the 29 sermons on the covenant of grace in Matthew Henry’s own handwriting that are in his possession. More recently he has published a biography of Joseph Addison Alexander of Princeton.

His mission interest is shown by his editing, with an introduction, of the narrative by Andrew Bonar and Robert Murray M’Cheyne of their visit to Palestine in 1839 (entitled A Mission of Discovery: The Beginnings of Modern Jewish Evangelism).

He edited the Reformed Theological Review, now the oldest theological journal in Australia, between 1988 and 2013.

Allan and his wife Mairi live on a rural property near the city of Geelong, Victoria.

‘Here are first principles for those who wonder if they are being called to the ministry, guidance for those in training, and wisdom for those already engaged in the work. That Preparation for Ministry comes from the desk of Allan Harman—Pastor, Professor, and Principal—is all the recommendation it needs. First class!’ — SINCLAIR B. FERGUSON