Piercing Heaven: Prayers of the Puritans 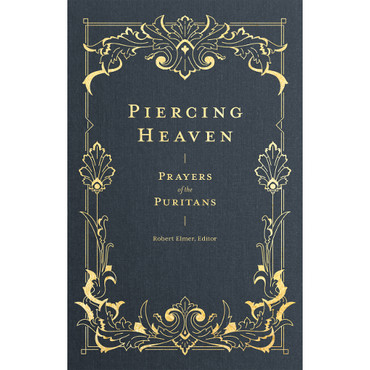 Piercing Heaven: Prayers of the Puritans

“That prayer is most likely to pierce heaven which first pierces one's own heart.”

For the Puritans, prayer was neither casual nor dull. Their prayers were passionate affairs, from earnestly pleading for mercy to joyful praise. These rich expressions of deep Christian faith are a shining example of holy living.

The Puritan combination of warm piety and careful intellect have fueled a renaissance of interest in their movement. This combination is on display in Piercing Heaven, a collection of carefully selected prayers from leading Puritans. The language in these prayers has been slightly updated for a modern audience while retaining the elevated tone of the Puritans. With prayers from Richard Baxter, Thomas Brooks, John Owen, and many more, each entry reminds us that heartfelt prayer is central to the Christian life.

If anything reflects the depth of spiritual knowledge and wisdom possessed by the Puritans it is their prayers. Never did they speak more profoundly, purely, humbly, richly, fearfully, lovingly and beautifully then when addressing God. This book is a collection of those profound prayers, providing much needed rich new and deep expressions for our prayers.

It might be said that prayer is theology with wings to reach heaven. If anyone’s theology had wings, it was the Puritans. The prayers of this outstanding book, adapted from the writings of the Puritans and other highly esteemed devotional writers, will be a great help for those longing to seek God with all their heart and all their mind.

Piercing Heaven is a gift to the church. Culled from prayers in the long puritan tradition, these petitions and praises are at once a call to reform our prayers and an aid to deepen our fellowship with the triune God. Organized after topic headings that will be intuitive for Christians, this collection makes a fine companion to other Puritan treasures.

–Dr. Chad Van Dixhoorn, Professor of Church History and Director of the Craig Center for the Study of the Westminster Standards, Westminster Theological Seminary