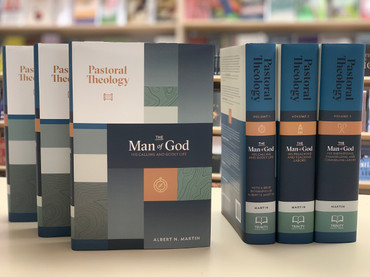 From 1978 to 1998, Pastor A.N. Martin taught Pastoral Theology in the Trinity Ministerial Academy, a church-based ministerial training institution. Every Friday throughout the academic year, all the students would gather for two hours of teaching presented in a four-year cycle. Subsequently various series of the audiotapes were widely circulated.

Many expressed their desire to see these lectures printed. As an intermediate step in responding to that desire, the Trinity Baptist Church eldership decided to encourage Pastor Martin to rework the original lectures and deliver them one ﬁnal time, while professionally recording them. This project was begun in 2007 and completed in 2012 with Pastor Martin teaching his entire Pastoral Theology course “one more time” to 25 to 30 men. The transcriptions of these DVD lectures constituted the basis for the ﬁrst draft of these edited lectures. Within these lectures there are very few issues faced by the ordinary pastor that are not addressed in one way or another. It is the author’s prayer that when all the volumes are nestled on the bookshelf of any pastor, that whatever his concern may be in conjunction with his pastoral labors, that he can expect that most likely, there is something in these volumes that would be of help to him. It is also the author’s prayer that even the most experienced pastor will ﬁnd in these pages much that will provoke him to pursue greater personal godliness, increased preaching effectiveness, and expanded pastoral usefulness.