Mothers of the Wise & Good by Jabez Burns 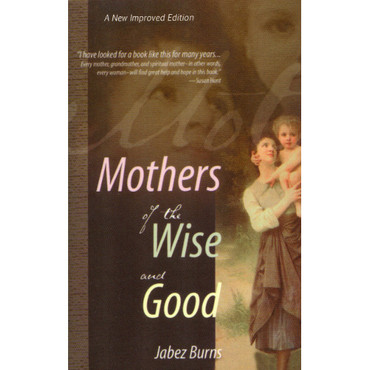 Mothers of the Wise & Good by Jabez Burns

This new updated and improved edition of Mothers of the Wise and Good will challenge and encourage every woman who reads it to pursue her course with renewed vigor.

"The writer has been powerfully struck by the fact, that there are few good works which are directly adapted to give the information, and supply the help which is needed. Good thoughts and interesting facts on this subject are scattered abroad through the length and breadth of our moral and religious literature; but thus it is almost unavailable to those whose benefit and encouragement should be chiefly aimed at. The plan designed in this volume has been to furnish within a portable and convenient size, a series of delightful instances of the success of pious maternal influence, interspersed with various striking incidents, both in prose and verse, calculated to interest and improve the mind, and followed by short essays on the various duties and responsibilities of the Christian mother. To collect and arrange has been the chief duty of the Author, being satisfied that it would have been impossible, for him, at least, to have provided original articles of equal value, and as directly adapted to the end contemplated. That the book may prove instructive, edifying and useful, under God's blessing, to that most numerous, important, and influential class for whom it is chiefly designed, is the earnest and prayerful desire of the Author."- Jabez Burns, March 1846

Jabez Burns (1805-1876) was one of the most widely-known English preachers of the nineteenth century. He was active in New Methodist and later Baptist circles. His many volumes of sermon outlines were awaited eagerly by preachers and for years have been standard sources for sermon starters and inspiration as well.

"This book answers the very questions that today's women are asking. The engaging anecdotes and instructive essays are wonderful. I have looked for a book like this for many years. Every mother, grandmother, and spiritual mother - in others words, every woman - will find great help and hope in this book." - Susan Hunt

"It is a useful and valuable work, replete with instruction and encouragement...it deserves to have a wide circulation." - John Angell James