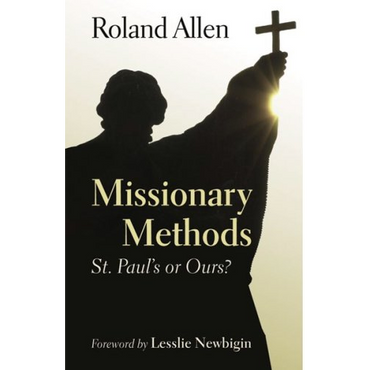 (1868–1947) An Anglican missionary in North China whoworked with the Society for the Propagation of the Gospel.Later he worked for a number of years in collaboration withthe founders of World Dominion and the Survey ApplicationTrust, and finally retired to Kenya, Africa.

This study of Paul's missionary work focuses not on the apostle's doctrine or character but on the method by which he accomplished his task. Throughout, Allen compares Paul's methods to modern missionary methods; he concludes by suggesting some ways the apostolic method might be usefully employed today.

"Roland Allen was an Anglican missionary in China from 1895 to 1903. For a few years afterward he was in charge of an English parish. For the next 40 years he was writing on missionary principles. Much of what he wrote seemed to be forgotten. The present work and a later volume written in answer to criticisms (The Spontaneous Expansion of the Church and the Causes which Hinder It) are the only two that have been regularly reprinted. Allen himself told his son that his writings would come into their own about the year 1960. In fact that year saw the republication in a single volume of many of his other writings." [From the foreword.]
It is amazing to me that Allen wrote this book in 1912. Even today his radical critique of Western missionary methods is cutting edge, though the biblical principles he advocates are now being embraced more and more by some ministries that are not tradition-bound.
While this book and its sequel (Spontaneous Expansion) address mission work specifically, the principles described do not apply only to how the people of one country do missionary work in another. These books really are about what the Bible has to show us about how to carry out the mission of the church, whether in our own culture, in ministering cross-culturally in our own back yard, or planting churches across an ocean.
If Allen is right in the conclusions he draws about finance (chapter 6), many (most?) church planting efforts may be operating by financial principles that do more to hinder rather than help establish a healthy, self-supporting church.
His observations on the biblical pattern for selecting and equipping elders for local church leadership challenged not only the status quo of the Anglican church of his day, but continue to challenge the practices of most churches today.
In my work as a church consultant, my sense is that (1) most church members, and probably even most pastors, are unaware of the radical differences between our presentday ways of doing church and the New Testament precedents, because they are largely ignorant of the biblical precedents; and (2) even when they become aware of some difference, there is a tendency to assume that those differences are inconsequential. Yet many of the most passionate of today's church leaders look at the church of Acts and long to see God's Spirit at work with that kind of power in the church today.
If we really long to recapture the vitality of the New Testament church, wouldn't it be worthwhile to seek to understand the principles by which it operated? (The "Methods" of the book's title is misleading; "Principles" would be more accurate.) Then we can consider whether those principles might be essential to the spiritual vitality of the church and go about asking how we can apply those principles in our context.
For anyone serious about developing such a biblically-rooted vision of how to go about doing church, I highly recommend this book and its companion volume.