Ministering Like the Master: Three Messages for Today's Preachers 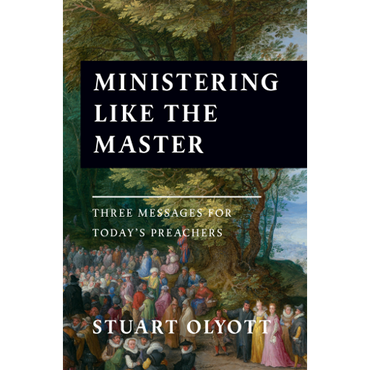 Ministering Like the Master: Three Messages for Today's Preachers

Christ was not a boring preacher! ‘How wonderful it would be,’ says Stuart Olyott in the introduction to Ministering Like the Master, ‘if Christian preachers throughout the world were ministering like their Master!’

Drawing on examples of Christ’s preaching from the Gospels, Olyott challenges preachers today with three features of their Master’s ministry. Christ’s style and method were not boring, but gripping. Christ’s preaching was evangelistic. Christ’s ministry was more than just preaching; his whole life was ministry. In a fresh, compelling and practical way, Olyott guides preachers away from some of the perils and pitfalls that could hinder their success. In so doing, he shows us just how essential Christ’s example is to those who seek to minister in his name today.

Stuart Olyott (b. 1942) became pastor of Belvidere Road Church in Liverpool after training at London Bible College and receiving a BD degree from the University of London. Liverpool pastorates occupied the periods 1967 to 1982 and 1991 to 1999. The intervening years were spent preaching the gospel in French in Lausanne, Switzerland, and pioneering new churches in both France and Switzerland.

Olyott has been awarded a MA from the University of Liverpool, and ThD from Trinity Theological Seminary, Indiana.

Stuart Olyott travels widely, helping and encouraging especially young and inexperienced pastors in the UK and Europe. Now semi-retired he continues his work as Pastoral Director of the Evangelical Movement of Wales. He is also an elder at Christ Church in Deeside, North Wales.