Jesus Christ and Him Crucified by D. Martyn Lloyd-Jones (Booklet) 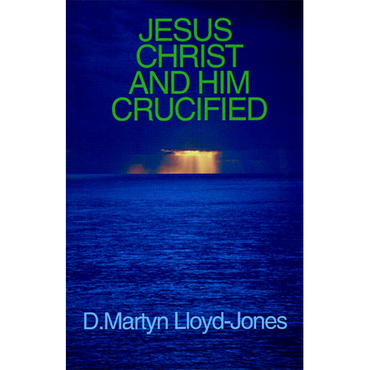 Jesus Christ and Him Crucified by D. Martyn Lloyd-Jones (Booklet)

Dr. Lloyd-Jones spent the greater part of the turbulent twentieth century in preaching the Word of God. The convictions with which he began his ministry remained with him, and in all this time the message was the same. He preached on the words, 'For I determined not to know anything among you, save Jesus Christ, and him crucified' at the commencement of his ministry in 1926, and again, from the same pulpit, in February 1977. So the sermon contained in this booklet is a historic statement. But it is more. It is a persuasive presentation of the unchanging gospel which has brought salvation to people all over the world throughout the two millennia now ended, and which remains just as vitally relevant as the new millennium begins to unfold.

Martyn Lloyd-Jones (1899-1981) was born in Wales. He was a dairyman's assistant, a political enthusiast, debater, and chief clinical assistant to Sir Thomas Harder, the King's Physician. But at the age of 27 he gave up a most promising medical career to become a preacher. He had a far-reaching influence through his ministry at Westminster Chapel in London, England from 1938-68. His published works have had an unprecedented circulation, selling in millions of copies.