Human Nature From Calvin To Edwards 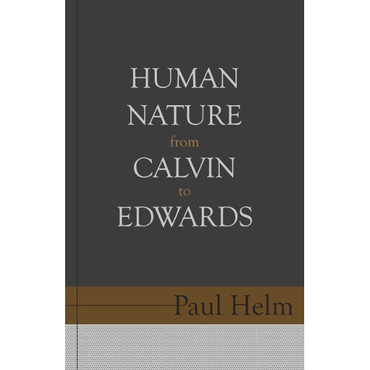 Human Nature From Calvin To Edwards

Paul Helm breaks fertile ground in this survey of theological anthropology in the Reformed tradition. Acknowledging the rich patristic and medieval heritage available to Reformed theologians, Helm works through a representative range of authors and materials during the period 1550 to 1750 in order to identify certain ways of thinking as well as elements of development and change. Addressing topics like the relation of body and soul, faculty psychology, and moral agency, Helm develops a compelling picture of Reformed thought on human nature that is sure to encourage more studies on this topic for years to come.

2. The Anthropology of Calvin and Vermigli

4. The Faculties and Powers of the Soul

PAUL HELM is a teaching fellow at Regent College, Vancouver, where he was previously the J. I. Packer Professor of Philosophical Theology. Before going to Regent he was professor of history and philosophy of religion at King’s College in London. His books include Eternal God, The Providence of God, Faith with Reason, John Calvin’s Ideas, and John Calvin: A Guide for the Perplexed.

“Paul Helm’s Human Nature from Calvin to Edwards is an important book that will make a major contribution to our understanding of early modern Reformed thought, specifically because it takes on the difficult and previously un-examined question of how Reformed writers from Calvin to Edwards understood human nature in the general “anthropological” sense of the term. This analysis should have preceded the efforts of a host of scholars to come to grips with the problems of the fall, sin, grace, and human freedom, given that human nature as such is the subject of the entire discussion of all of these theological problems. In other words, Helm provides the context for further analysis of a host of theological issues. “The book also, by examining the anthropological thought of a well-chosen series of writers, including Aristotle and Aquinas as well as various early modern Protestants, both illuminates the philosophical backgrounds of Reformed thought and draws our attention to a series of significant but often neglected thinkers.” —Richard A. Muller

“In this book Paul Helm provides a much-needed investigation of Reformed theological thinking on human nature during the period from Calvin to Edwards. He studies a diverse selection of authors, considers ancient philosophical and theological backgrounds, and appends observations on more recent developments. For anyone interested in Reformed theology, the faculties of the soul are a highly relevant theme, and for all those who are interested in the Reformed understandings of these faculties, Helm’s book is a must read.” —Aza Goudriaan